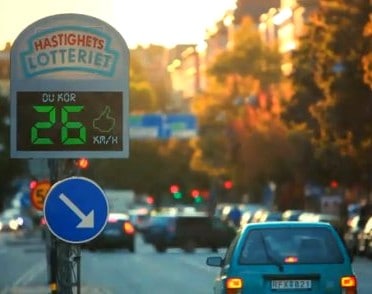 PSFK reports that the Speed Camera Lottery, in addition to photographing speed violators and issuing tickets, would also capture those vehicles that are driving within limits and enter them in a lottery to get a chance to win money from the revenue which was generated from speeding tickets.

The idea was tested with great success over a 3 day period involving over 24,000 cars and resulted in an average vehicle speed reduction of 22% during the experiment.

The Speed Camera Lottery idea was also embraced by the Swedish National Society for Road Safety and has now been implemented in Stockholm.