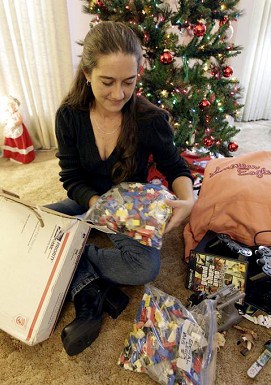 Stephanie Edwards-Musa finished her Christmas shopping early this year. Her 13-year-old daughter is getting a PlayStation 2 and clothing from Hollister and Aeropostale. For her 5-year-old son, it’s a bundle of toys, mostly “Star Wars”-themed.

USA Today reports that Edwards-Musa, a Houston Realtor, found these items used on ThredUp.com, an online toy exchange that launched last week. Parent-to-parent swapping sites like this one, growing in popularity, offer families a way to clear their closets of toys and clothes their children have outgrown in exchange for items cast off by older kids.

Thrifty parents are finding plenty of places to barter on the Web. At the online community SwapMamas.com, hip moms trade goods from baby slings to clarinets without any money changing hands. Swap-seekers place hundreds of listings a day on classifieds service Craigslist.org, while parents just looking for freebies gravitate to the local forums on Freecycle.org.

ThredUp CEO James Reinhart says the site has benefited from middle-income Americans’ heightened frugality; its membership, now at 50,000, has grown steadily since it debuted with clothing only back in April.

The fallout from the recession still has many parents struggling to balance the imperative to spend less with the desire to give their kids the things they want, especially during the holidays.