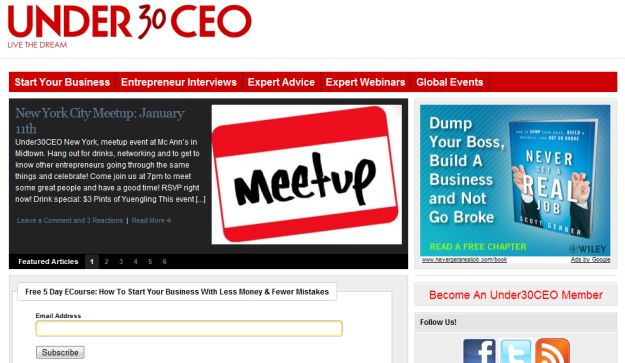 When most kids were still trying to figure out their college major, Matt Wilson had began to make plans for his own business. He even founded an entrepreneur organization at his school. After graduation, though, his life encountered and unexpected twist reports Reuters.

He moved back home to East Fishkill, N.Y., with his mother, who was struggling to maintain her real estate business during the height of the economic recession. Wilson was even forced to accept a job digging ditches to help pay the bills. There wasn’t much time, or energy, to develop his own venture.

Then, after a conversation with a childhood friend, Jared O’Toole, the pair decided to partner in rebuilding the entrepreneur network Wilson created in college. Under30CEO.com was born, starting as a social network for entrepreneurs and evolving into a content-rich site. Wilson and O’Toole draw on their own experiences to provide educational resources, as well as mentor, other young entrepreneurs. Based on a subscription, advertising and consulting services revenue model, Wilson says the site attracts roughly 150,000 page views and 75,000 unique visitors per month.