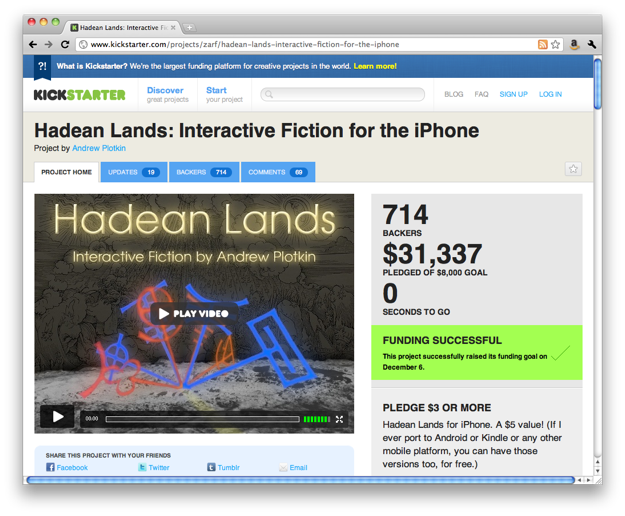 In early November Andrew Plotkin came with a crazy idea. He wanted to spend the rest of his life writing text adventure games. For those of you who don’t remember computer games from the early 1980s, text adventures games are old fashioned text-only games that are also called “interactive fiction.” The genre hasn’t had a commercial success in nearly twenty years. Plotkin’s thinking was that a new generation of Kindle and iPhone carrying readers could bring text adventures back to life.

Since he needed money to make this happen, especially since he was going to quit his job and do this full time, he posted a conservative pitch on the Kickstarter: he’d write one full-length game for the iPhone. Kickstarter bills itself as the largest funding platform for creative projects in the world. Every month, tens of thousands of people pledge millions of dollars to projects from the worlds of music, film, art, technology, design, food, publishing and other creative fields.

If Plotkin’s conservative idea got funding, that would indicate to him that the idea had potential. Fourteen hours later, fans had pledged over $8,000! As of right now, there’s more than $31,000!

CNN Money has more of the story.