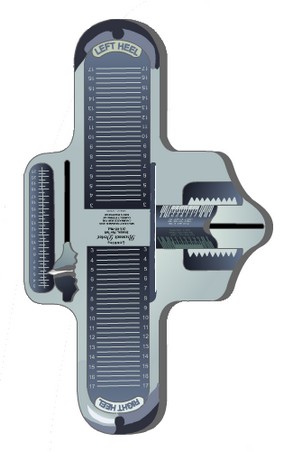 According to The Wall Street Journal, many have tried, but no one has ever come up with a more elegantly simple way to measure the human foot than Charles Brannock, inventor of that ubiquitous metal gadget found in shoe stores and known, fittingly, as the Brannock device.

Created in the 1920s, Brannock’s tool is among the most enduring industrial designs ever. The company’s original paperwork now resides in the Smithsonian Institution. Cameron Kippen, a foot historian and podiatrist in Australia, calls them an “icon of quality” that changed the way shoes were fitted.

Its 1929 patent, however, expired long ago. Over the last two decades, the Brannock device has become a target for copycats. Although Sal Leonardi, now owner, won’t give details on sales at the closely held company, he says foreign-made devices have cut into his market.

There isn’t much the company can do to stop imitators. Leonardi’s attempt to trademark the product’s distinctive shape was rejected. “We don’t mind competing with someone making a foot-measuring device, but not if they can make them to look exactly like ours,” says Leonardi. Which they can.

Nobody else can call it a Brannock device, since the name is protected by copyright. Beyond that, just about anything goes. And does.

In his office the company’s tiny 10-employee factory outside Syracuse, Leonardi keeps a handful of copies. One knockoff even includes a copy of Brannock’s original instruction sheet–with only the name of the company changed.

Brannock was the son of a Syracuse shoe merchant who began developing his device while still a student at Syracuse University. At the time, the main tool available was the “Ritz stick,” a simple wooden ruler that gauged only foot length, not the other dimensions measured by a Brannock. Brannock made his prototype out of erector-set pieces and applied for a patent in 1927.

They were an instant hit, though business really took off during World War II, when the government contracted Brannock to produce a version of the device that allowed soldiers to have both feet measured at once. That sped the process of distributing footwear.

Jonathan Walford, a shoe historian, says there is a “whole Brannock field out there–guys who collect and are really into them.”

Photo by The Brannock Device Co..