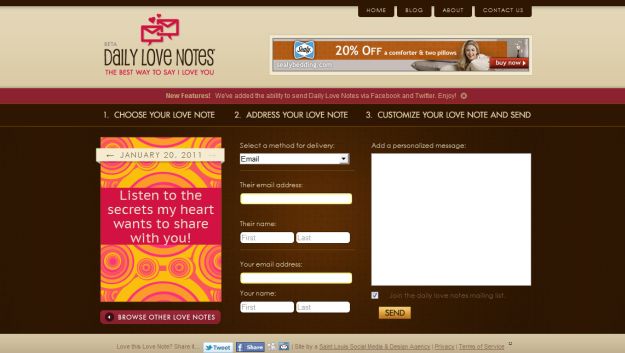 You could probably say that Kevin Green is an old fashion romantic. He definitely knows how to tell a woman exactly what is on his mind. According to STLToday.com, he’s using technology to help him get that message across.

Known as, “The Love Guy,” Kevin is now helping men spread that message online. Whether they’re looking for a way to tell their wife, girlfriend, mom, or sister that they care.

Green says he got the idea for the site when, as a college student short on cash, he started it as an inexpensive gift for his girlfriend at the time. He said today that with Christmas approaching, he didn’t have enough money to buy his gal an expensive gift so he decided to write her a love note for every day of the year.

His daily love note “calendar” started getting recognition around campus and next thing he knew, Green says he had friends asking him to write love notes for their girlfriends. Some people are just better at these things than others.

In 2008, he started a free website based on his original calendar with the idea of saying “I love you” every day in the form of a short, sweet note.

Green says he leaves room for visitors to his site to customize the love notes.