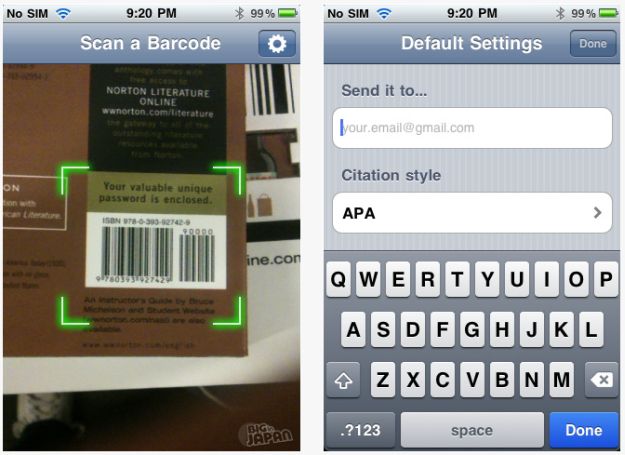 Students have something new to look forward to when they write their next essay.

Gareth MacLeod recently spoke with Fast Company about his new iPhone app, Quick Cite. It is created for college students by a college student. Once you have installed the app, for a meer $.99, all a student must do is take a picture of the barcode on the book they need to reference. The app will then take them through a variety of steps to help the student receive the citation information they need for their essay, effectively cutting the amount of time spent on putting together an accurate bibliography.

The app works by using the smartphone’s camera to scan the barcode on the back of a book. Then it emails you a citation formatted to fit one of four common bibliographic styles: APA, MLA, Chicago, or IEEE. The app was one of seven developed over seven sleepless days by seven undergraduates at the University of Waterloo. Thus they called the week-long experiment in coding creativity and class-cutting “7Cubed,” and even made a little video about it [after the jump].

There’s a slight hiccup in the app, though. It appears that the information embedded in the barcode is sometimes abbreviated or incomplete. The Chronicle of Higher Education test-drove the app and found that the citations that came over had a few glitches, reading “Cambridge Univ Pr.,” for instance, where bibliography purists would insist on a full-fledged “Cambridge University Press.” Also, barcodes only became standard on library books around the 1970s, so many books won’t be scannable.