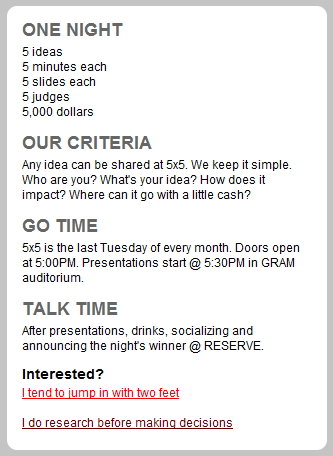 If you have five minutes and you’re lucky enough to be picked as one of five people, you might have a chance to win $5000.

According to NPR, two entrepreneurs in Grand Rapids are trying to kick start the economy by feeding the entrepreneurial spirit.

Grand Rapids, like most Michigan cities, is struggling to overcome the recession, to diversify its manufacturing-reliant economy, to grow new businesses.

Rick DeVos and Bill Holsinger-Robinson think they can help. They’re sitting in the bright, trendy, ivory-green offices of Pomegranate Studios, a business incubator they founded two years ago. Entrepreneurship is in the DeVos family’s DNA. His grandfather started Amway, one of the world’s largest direct selling businesses.

On the last Tuesday of each month, Pomegranate Studios offers five people five minutes to pitch their idea for a business, an organization, art project, anything really. A panel of judges then awards up to $5,000 to those with the best ideas.

The most recent 5×5 Night just passed, but Michiganders can watch for another opportunity at the end of next month.