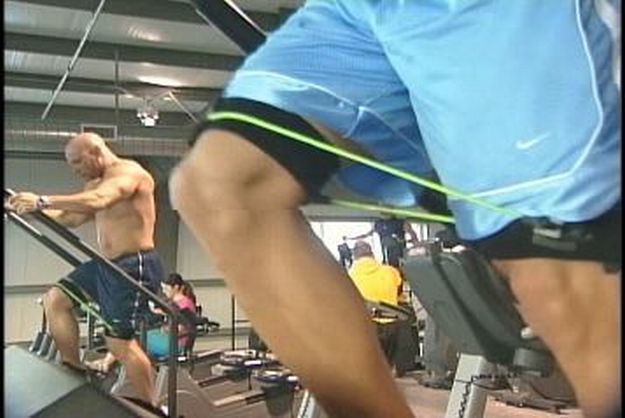 Not many people would consider strapping some exercise bands to their legs. However, Stacy Erwin believes he has created the perfect tool for exercise, reports The Kansas City Star.

â€œItâ€ is the Overland Park inventorâ€™s $50, not-sold-in-stores, ready-for-prime-time weight-loss device, Fitness Stride. And though it looks like nothing more than two bungee cords held in place by Velcro, itâ€™s actually Erwinâ€™s American dream. It has been his life for most of the past decade. He has invested, by his own estimate, $300,000 in developing and marketing it.

Anyone who comes within Erwinâ€™s force field gets a demonstration of the Fitness Stride (Patent No. 6,884,202).

Talking nonstop, Erwin put me through a short but brutal workout.

While I caught my breath, he explained that just 10 iterations with this torture device was â€œthe equivalent of walking two miles.â€

The person who walks two miles a day, however, is not Erwinâ€™s target customer. Heâ€™s thinking bigger, in more ways than one.

His ideal customer is someone with a sedentary day job who doesnâ€™t work out and watches too much TV. Imagine this person happening on an infomercial that shows a shapely model walking into work. She has a Fitness Stride on, though nobody knows that since itâ€™s concealed under her skirt. (Erwin said one of his early customers lost 50 pounds this way.)

â€œThis will solve the obesity issue in this country just as sure as Monday follows Sunday,â€ he said.