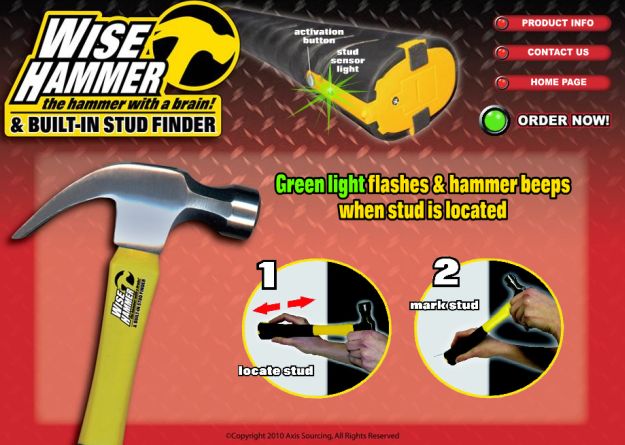 Most people would not give the hammer in their garage or shed a second thought. After all, the job it fills is quite simple. The person picks it up, and it hammers things. However, Kenneth Del Colgiano felt that was not good enough.

Kenneth has created the Wise Hammer. It not only hammers things, but it has a built in stud sensor and marking nub. Everything a person could possibly need to hammer in a nail is included in one hammer, reports Al.com.

“This isn’t a hammer that you can build a house with,” said Del Colgiano, a 47-year-old from New Jersey who moved to Foley in 2003. Instead, he said, the target market is the women who hang everything from pictures to shelves on walls inside their homes.

The tool is in the middle of a test run on Lowe’s shelves (and website) that should last through May 1, he said.

At $19.98, it is priced at the upper end of what the average homeowner would likely pay for a hammer, said Greg Coogan, a customer service associate at the Lowe’s in Daphne. There, hammers start at about $4, and stud-finders are priced from $9.98 to $15 or so, he said.

A successful Lowe’s test could open doors at places like Home Depot or Walmart, Del Colgiano said. He has licensed the product to a California firm, though he’s a ways yet from recouping the $40,000 to $50,000 he’s got in developing the product, he said.