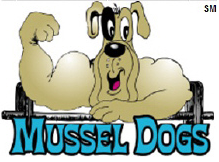 Debi DeShon used to train dogs to sniff for drugs and other contraband, but as the economy slowed she looked for a new niche. She found on in mussels:

At her new business she’s using some of the same techniques she used to “Mussel Dogs” is DeShon’s new detective venture, and She’s training dogs to find invasive species of mussels – the quagga and zebra mussels.

According to DeShon and park officials at the Woodward Reservoir in Oakdale, the Quagga and Zebra mussels can multiply out of control and dramatically change the ecosystem. They are often transported from lake to lake by boaters. The mussels are only about the size of a finger nail, and their larvae can be microscopic, making them tough to find. Quagga and Zebra mussels can also live for up to 30 days out of the water. The mussels have been found in lakes in surrounding states and in southern California.

“What our dogs do is sniff a boat before entering into the waterway to make sure the boat doesn’t have these mussels on them,” said DeShon, who demonstrated her brown labrador Popeye’s ability at the Woodward Reservoir.