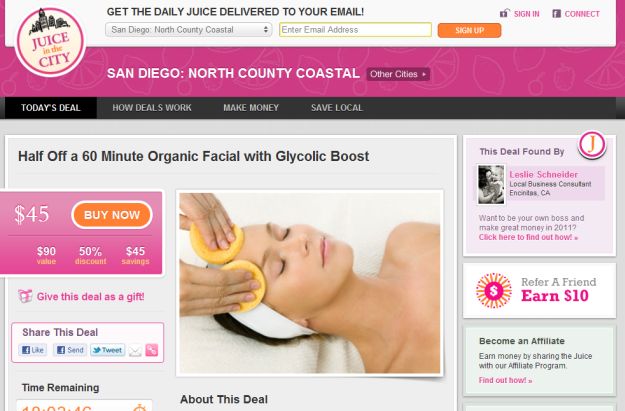 Everyone has different interests, but mom’s still share many of the same needs. After their day is done, mom’s are ready to relax. Juice in the City has the deal for them.

For Sarah Eisner, it started last Mother’s day. Instead of receiving an hour of peace, she started a business with Philippa Smith. Together they have created Juice in the City, a deal site geared toward moms, reports The Daily Journal.

Juice in the City launched last year in San Mateo. Since then, the mom-driven site has expanded to more than 20 markets throughout the United States. The hope isnâ€™t to bombard local businesses with one-time customers hoping to get a cheap cupcake. Instead, Eisner envisions partnering with local businesses to introduce new, long-term customers.

â€œJuice … builds relationships between local moms and local businesses,â€ said Eisner, who added a special part of everyoneâ€™s life is a group of memories attached to experiences in their town.

Through Juice, moms can bring their children to have the same experiences locally, she said.

For the most part, the deals are vetted and suggested by moms as well. Eisner put together the first 20 deals with all her favorite places to go. The company today has more than 200 moms across the country trying out businesses then recommending deals for the site. During the first year, Juice launched in an average of one market per month. Now itâ€™s more like two a month and speeding up, said Eisner.

The network of moms supporting Juice has become its own support group of sorts with women sharing stories of their kids, their job and life, she said.

â€œIt feels like a new-age Mary Kay. Itâ€™s really excited for me to read their life success stories. Unlike an Avon or Mary Kay, this is something a mom in North Carolina can join up and work with us and all of a sudden be part of one of the hottest tech trends in Silicon Valley,â€ she said.

Screenshot from Juice in the City