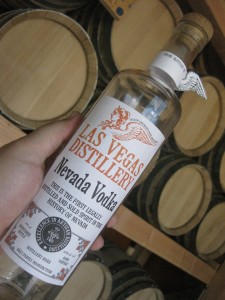 To those of us who haven’t tried to open a business there, Nevada seems like a libertarian utopia. Casino gambling all manner of victimless crimes are legal there. But, as one husband and wife tea of entrepreneurs discovered, there’s one thing you can’t do:

Launching a business is a feat unto itself, but starting the first business of its kind in the state presents a whole new set of challenges.

For George Racz, the July 22 grand opening of the Las Vegas Distillery capped a two-year process of moving to Southern Nevada from New York and establishing a distillery where none existed.

The Transylvania, Romania, native and his wife, Katalin, chose Nevada for the home of their new business after researching states that lacked distilleries. Little did they know that the state had no alcohol manufacturers due to Prohibition-era legal hoops.

Nevada law prevents Racz from selling his vodka, gin, eight varieties of whiskey and a rum-whiskey mashup called, appropriately, “rum-skey,” directly to customers. The distillery has to go through a middle man, a distribution company, to sell its booze on store shelves.