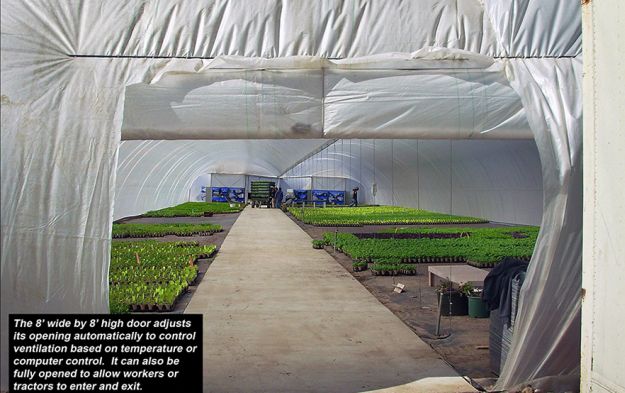 From the outside, it looks like a crash-landed blimp. On the inside, it feels like a wind tunnel. For inventor David Chelf, this strange structure — a high-tech greenhouse with no skeleton, whose lightweight skin is held aloft on breezes from giant fans — looks like the future of agriculture.

Chelf, the founder of Airstream Innovations, derived his unusual greenhouse from a single principle: plants grow healthier and more productively in moving air. He prefers a gentle, three-miles-per-hour wind, which he says is perfect for helping moisture evaporate from plant leaves without dehydrating them.

Made of heavily reinforced plastic, his greenhouse is about 33 feet wide and 330 feet long, with a tower for air intake at one end. The upper half of the tower has flaps that open inward, funneling wind to a pair of fans below, which reduces the power needed to keep them spinning. A gauzy netting around the fans catches insects sucked in from the outside.

In cold weather, the incoming wind can be slowed to a trickle, allowing the air to be heated before it blows into the greenhouse. In times of extreme heat, air gets cooled the same way it’s done in traditional greenhouses: by introducing mist and letting it evaporate, or by using evaporative cooling pads.