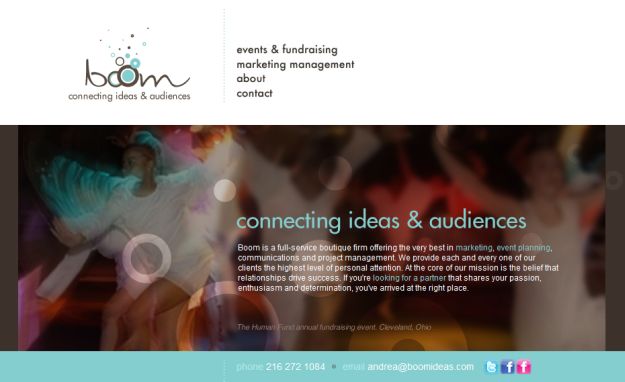 When trying to think of a good name for her marketing business, only one word game to mind. Andrea Wedren decided to call it Boom. It let her customers know that she was there, ready, and exploding on the scene, reports the Cleveland Jewish News.

After working at the Free Times, Wedren, of Hunting Valley, became a public relations and marketing consultant for small companies and nonprofits. She was then hired as executive director at The Human Fund, where she further honed her marketing and communication skills and made important contacts.

Finally, with a $10,000 investment from a private investor, she launched Boom in 2007.
In a competitive market, the fledgling entrepreneur soon realized the importance of being assertive. â€œI learned to trust my own voice and not be afraid to speak up,â€ she said. She also learned â€œnever to burn bridges and always to be one step ahead of my clients and to provide terrific personal service.â€

The native Jewish Clevelander never worried about building a business in her hometown. â€œBecause of Clevelandâ€™s size, if you are doing a good job, your name gets around very quickly,â€ said Wedren.

Despite the economic downturn, Boom is prospering, she said. She hired a full-time employee in 2010. Organizations that scaled back their marketing staff are now outsourcing work, she explained. And thatâ€™s been a big boom for Boom.

Although she puts in long hours, Wedren finds her work extremely rewarding. â€œIt is wonderful to know I am independent and can support my daughter, now a high-school senior, and myself and take charge of my own life,â€ she said.