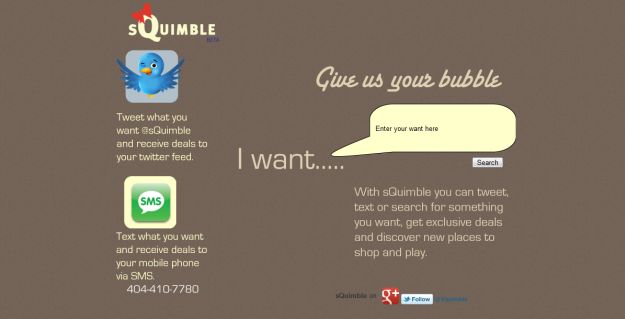 It all started when Marlon Brown’s co-worker tweeted about wanting a mocha. What if a company near her could read that post and instantly offer her a deal on a mocha from their shop?

Here’s how it works:

If you’re in the Charleston area, you can text, Tweet or enter on squimble.com what you want. If you picked a keyword associated with one of the approximately 60 businesses that have signed up so far or entered the name of one of those establishments, a coupon will appear.

If you request something that hasn’t yet been tied to a business, you get a message that says there are no such deals within a 40-mile radius.

Brown has recruited the businesses so far but by next month, businesses will be able to sign up themselves.

“They’ll be able to curate their deals,” he said.

Among the words that work now are pizza, wine, manicure and chocolate, which returns half off a half-dozen chocolate-covered strawberries from Chocolate Treats by Rainee.

Brown, a 33-year-old Summerville resident with three kids, isn’t charging businesses for their keywords yet and is bankrolling sQuimble himself.

His cousin and two women he knows through the Art Institute, where he’s head of technology, fill out the sQuimble team. Depending on how the business scales in Charleston and eventually elsewhere, Brown hopes to bring on a user-interface specialist.

For now, it’s the start-up passion that keeps him going. Brown aims for the same sort of good feeling in his target audience.