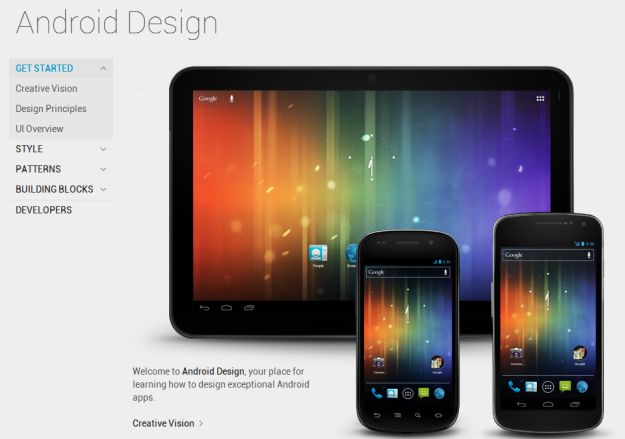 Google wants developers to make the best apps possible for their android system, so they launched a website to help developers do exactly that.

On Thursday, Google launched Android Design, a web site created specifically to help aid developers in the creation of applications for ICS. The site offers a comprehensive visual to third-party application developers, giving suggestions on everything from how to implement different visual elements to overall back-end patterns for the OS itself.

In theory, it will help developers better understand just how the Android team thinks about layout and implementation, while simultaneously giving suggestions to interaction designers on how to maintain visual integrity. Basically, it will help both first-time developers and Android veterans make apps look less crappy.

Which has been a chief complaint of developers whenever another version of the OS is released. Developers are forced to reverse engineer the code from the new version and translate that to the previous version of Android to figure out how to move their app to the new software environment. Whatâ€™s more, Android averages a new version launch about twice a year. Itâ€™s an incredibly fast pace in the mobile world, not to mention a pain in the ass for mobile developers who just want to keep their apps up to speed.