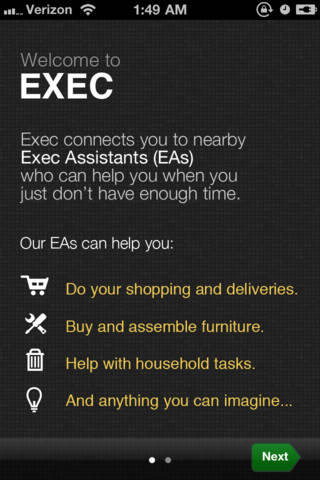 Justin Kan already has quite the track record.

His second [business], Justin.tv, has turned into a runaway success since rebranding to Twitch.tv. Its traffic has doubled in the past six months. It now has more than 16 million unique visitors every month.

BI: So what is Exec?

JK: We’re launching an app that lets you outsource any job or errand in real-time. All you have to do is load up the app and type up a short description of what you want. We find someone within 10 minutes to do your job for $25 an hour. It’s pretty simple.

Most importantly, though, it’s not an open marketplace. All the people who are providers are people we’ve interviewed and hired through a few rounds of interviews. It’s just starting in San Francisco, but we’re gonna build out the supply for every place we go. It’s open 9 a.m. to 9 p.m.

For workers â€” we call them execs â€” it’s on demand. They’re eligible for jobs as soon as they log into the mobile app. If they want to work only on Monday and Tuesday from 11 a.m. to 5 p.m., they can just log on during those times.