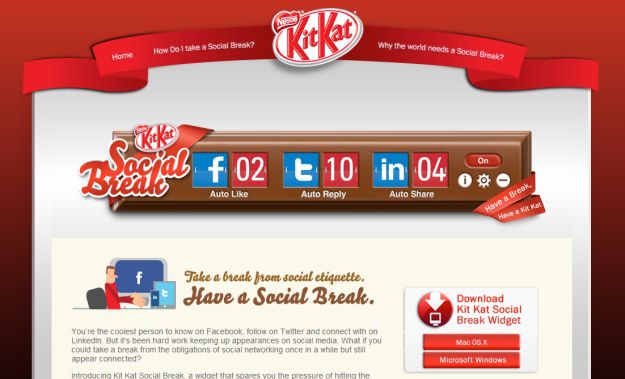 KitKat no longer expects you to break off a piece of their candy, now they are giving people a break from their social media profiles too.

The software, Social Break, automatically sends random updates to users’ Facebook, Twitter and LinkedIn accounts. It will be officially launched in Singapore later this week and is free to download from kitkat.com.sg/socialbreak.

While the application is a tongue-in-cheek marketing gimmick, the developers behind the software, ad agency JWT, say it also highlights a serious problem among younger users, especially in Asia: growing stress about time spent maintaining a presence on social networks.

JWT surveyed 900 19-26 year olds in China, Singapore and the United States and found that more than half considered it too time-consuming to keep up with all their social media commitments and conceded that the time they spent on such sites had a negative impact on their job or studies.