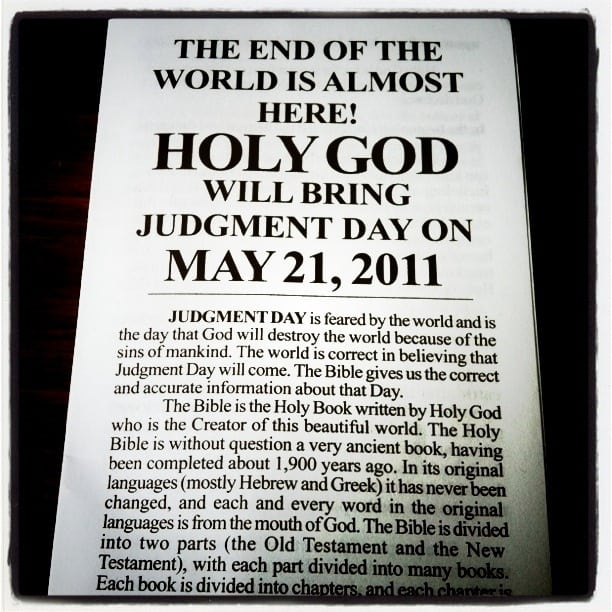 Todd Strandberg, the proprietor of RaptureReady.com â€” the most popular Rapture-preparedness website in the worldâ€”is part of a new generation of entrepreneurs trying to take advantage of Campingâ€™s absence. Unlike Camping, the new apocalypse establishment is offering an unprecedented array of doomsday-themed literature, podcasts, survival kits, and other goods and services for navigating the end of times.

Jack Van Impe, a televangelist from Troy, Mich., has developed an e-commerce business hawking educational literature such as the Prophetic Guide to the End of Times ($14.95) in addition to DVDs like 11:59: The Countdown (two-discs, $34.95). Van Impe, who co-runs his ministry and budding apocalypse empire with his wife and fellow prophet, Rexella, is competing for market share with the Costa Rica-based writer Tim McHyde; Alex Dodson, whose Watchman Radio Hour enjoys a nationwide audience; and evangelical minister and author Tim LaHaye, who has co-written 16 Judgment Day-inspired novels. According to Cheryl Kerwin, senior marketing manager at Tyndale House Publishers, LaHayeâ€™s Left Behind series has sold 63 million copies worldwide.

More details on the financials:

All are facing a common problem of the Rapture business: Theyâ€™re making more money than they can spend before the world ends. Keith Preston, owner of Rapture Ready Consulting in Kenton, Ohioâ€”which is completely unrelated to RaptureReady.com, he saysâ€”estimates his company grossed $380,000 in 2009 by selling products like screen savers featuring the Red Sea and a smartphone app for $4.99 that tells you if youâ€™re in a flood zone. Although sales plummeted to $200,000 in 2010â€”the short-lived economic uptick, Rapture-sellers say, cast a pall over the sectorâ€”Rapture Ready rebounded this year. Preston is currently at work on an app for everyone who is not Raptured. â€œLetâ€™s say 2 million people disappear,â€ Preston says. â€œYouâ€™ve got doctors and police officers, you have IT guys, writers, and politicians. So the problem is, whoâ€™s going to do whatever they were doing? You need an app for that.â€ How he plans to sell it from Heaven remains unclear.

As a Christian, this kind of stuff makes me sick.