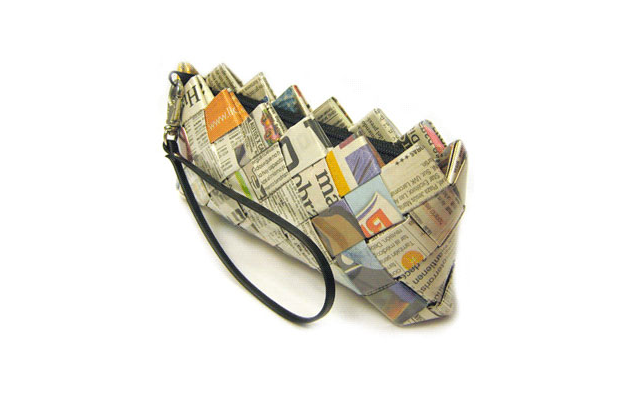 A recent prison inmate from Georgia has turned his time in the slammer into an entrepreneurial education. His new business: making women’s purses from newspapers.

Vincent joined them a few years later. He worked for Diamond Plastics in Macon and on the chassis line at Blue Bird in Fort Valley until he was laid off. After a brush with the law, he found himself incarcerated at the Western Pre-Release Center, a Department of Corrections facility in Butler.

It was there a fellow inmate taught him the method of folding strips of newspaper, cigarette wrappers and other paper products. He would wrap them tightly in cellophane (for waterproofing) and transform them into intricate designs on everything from handbags to flip-flops to laptop covers.

It was a difficult skill to master, almost like putting together a challenging jigsaw puzzle. But Vincent had enjoyed working and creating with his hands ever since learning to carve in his high school woodshop class. And it was something to do to pass the time.

He never dreamed it would become his livelihood until he was released and had a difficult time finding a job. He started his own foray into this brave, new world. He purchased some supplies and his parents, longtime Telegraph readers, had plenty of newspapers around the house.