About five years ago, I was slaving away as a corporate IT drone, working on a dusty old shipping computer in a frigid warehouse.

I was having trouble upgrading the UPS software because I had to type in a long string of numbers and my fingers kept missing the correct keys on the keyboard.

The shipping department manager noticed my trouble and said, “Wow, I thought I was a bad typer.”

“I’m having trouble typing because my fingers are so cold,” I responded.

Almost immediately I had an idea.

Computers have fans on the back to vent out the hot air. What if we could direct that warm air onto the keyboard, where it could warm the fingers of the typist?

I asked an engineer friend if it was possible to just plug a tube in the back of the computer and direct it where you wanted the air to go. He explained that most of the heat would probably be lost before it reached the keyboard and that most likely it would damage the computer because the fans inside the computer would have to push a greater volume of air.

This was in the early days of crazy USB attachments, and I wondered aloud if we could somehow power a fan via USB and use it to draw the warmed air out. He said it was possible, and that there might be a heating element that was small enough to be powered via USB as well. Satisfied with my feasibility of my idea, I continued to think about it for a few more hours until I was distracted by some other real work. I completely forgot about the idea.

I just saw a this keyboard with integrated heater and fan for sale on Japan Trend Shop. 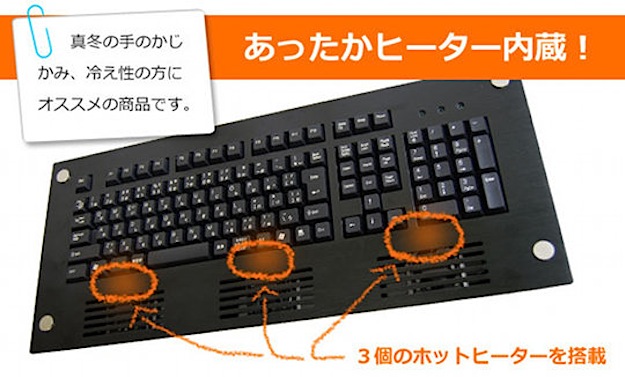 I could be upset, as so many are, when they see that “their idea” has been “stolen” and created by someone else, but I’m not. It just proves my adage that ideas are worthless; execution is everything.

This product, if it works, would be absolutely perfect for those cold warehouse computers used in shipping departments and manufacturing around the world. I can foresee great profits for someone who get’s this in front of the right people.