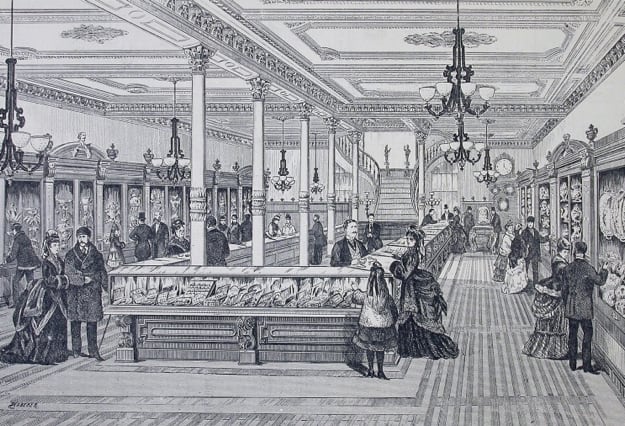 On this day in 1840, Canadian businessman Henry Birks was born.

In 1857, Birks was hired as a clerk at Savage and Lyman in Montreal, reputed to be the finest jeweller and watchmaker in the Province of Canada at that time. Although Birks eventually became a partner in the firm in 1868, the company’s later financial difficulties encouraged Birks to leave in 1877.

With an investment of CAD$3000, Birks opened his own small jewellery shop in 1879 on St. James Street in the heart of Montreal’s financial and commercial district. In 1893, Birks went into partnership with his three sons (William, John and Gerald), and the name of the firm became Henry Birks and Sons. As the focus of Montreal’s commercial centre moved northward towards Saint Catherine Street, the Birks store moved to new premises on Phillips Square in 1894, where the company still maintains a store and corporate offices. Commencing in 1901, Birks oversaw the expansion of the company across the country, with stores opening in Canada’s largest cities.

Henry Birks served as a prototype to many Canadian entrepreneurs of the 19th century. The son of English immigrants, his education was focused primarily on commerce, and he subsequently put it into practice by working in a large and successful firm. As soon as the circumstances would permit, he started his own company, which prospered and ultimately became a Canada-wide commercial empire.

For more on Henry Birks, read Canada’s Entrepreneurs: From The Fur Trade to the 1929 Stock Market Crash.