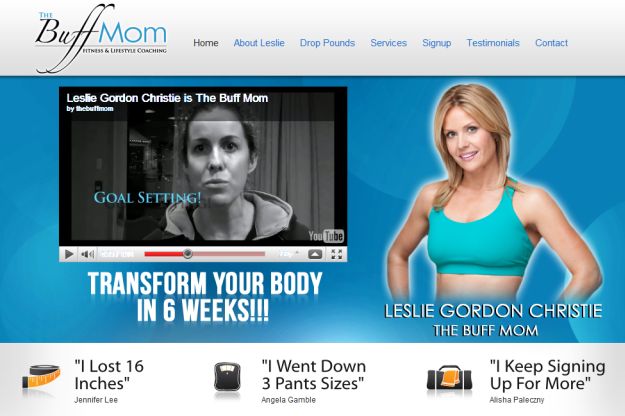 Leslie Gordon Christie started out a pudgy child. During her recent pregnancies, she even found herself reaching over 200 pounds. From that experience, she was determined to turn her body around. According to TheRecord, it took 7 months but she succeeded.

Viewers of CTV Southwestern Ontario (formerly CKCO) television news knew how big she grew – she was on air until her son Allister was born 10 months ago.

With maternity leave ending, she quit her television news job last Monday. Instead, she’s planning to expand her part-time fitness training work into a full-time career as a motivational fitness coach specializing in helping women who’ve just had a baby.

“I want to take all my talents and transform people,” she said.

Three years ago, she started offering Better after Baby fitness programs. Today, she runs boot camp classes five days a week, mixing heart-building aerobic exercise with weight training and a bit of mutual support to stick with the get-fit program.

Success in losing weight and boosting fitness depends mostly on mindset, self confidence and setting goals.

“Let’s start to look at building from the inside out,” she said.

“You have to want something really badly to make it happen, otherwise your habits will take over.”

She’s reluctant to talk about the Buff Mom’s business plan in detail, but said internet-based courses and coaching are coming to thebuffmom.com. And she hints that cameras remain in her future.

Screenshot from The Buff Mom