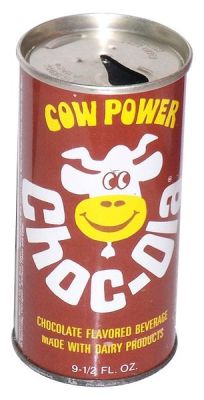 According to Bloomburg-Businessweek, a pair of entrepreneurs hope to relaunch a classic. Their goal is to draw in the baby boomer crowd with nostalgia, and introduce a chocolaty treat to those who have a sweet tooth.

Last year, Iaria snapped up the trademark for little more than a $275 application fee and acquired the recipe separately, The Indianapolis Business Journal reports.

Iaria, who owns Indianapolis’ Rock-Cola Cafe, began bottling the beverage in small batches for his restaurant’s customers. He and Wolfla then pitched reviving Choc-Ola to Martin’s Super Markets, a 21-store chain in northern Indiana and southern Michigan.

That led to a deal with Prairie Farms Dairy to produce the drink at its Anderson plant.

Advertising copywriter Evan Finch, 46, found out that Choc-Ola was back after visiting Rock-Cola Cafe. He savored the taste of the drink he enjoyed during his childhood so much he created a Choc-Ola fan club on Facebook.

“The short answer is that Choc-Ola tastes like 1973 to me, and drinking it brings back a lot of good childhood memories,” said Finch. “I don’t think I really missed it until I couldn’t get it anymore.”

Don’t remember the original? Wikipedia has some information about it.

Choc-Ola is an American chocolate beverage that was formulated in the 1940s by Harry Normington, Sr. from Pennsylvania.

After moving his family down to Vincennes, he began making plans for a new business in which he planned to bottle and sell a 6 oz chocolate drink; which is what would eventually become Choc-Ola.

His business planning started with visiting nearby big cities to scout out locations for a building suitable for bottling. While he wasn’t doing that, he was out acquiring some of the equipment and materials he would later need at the plant, such as motors, wood crates, glass bottles, etc. Much of this would come from junk yards due to the limited supply of materials as a result of WWII.

By 1944, Harry had finally found an adequate building in nearby Indianapolis, which also happened to have a house available right next to it into which he could move his family. The building was located at 2301 Churchman Ave. and the house was at 2323 Churchman Ave.

That same year, after moving his family to Indianapolis and establishing Choc-Ola Bottlers Inc., Harry purchased a route truck and began distributing Choc-Ola throughout central Indiana and eventually to all of Indiana and the bordering areas of Illinois, Kentucky, Ohio and Michigan.

Choc-Ola would eventually gain an enormous and loyal following over the years.