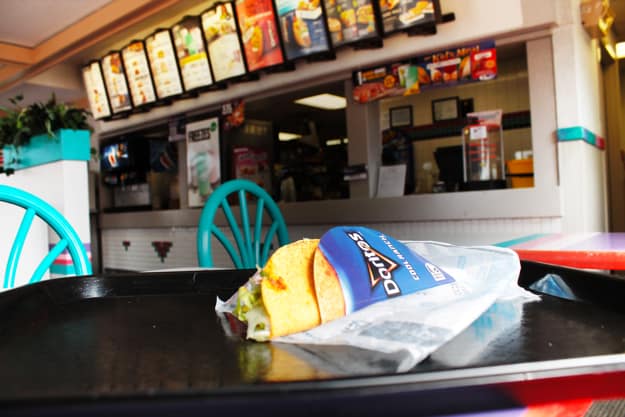 Taco Bell knows its customers really well. It targets the young and hip who love cheap, fast, and wacky food. Taco Bell knows its customers are completely plugged into social media and grew up eating Doritos. So they decided to combine the two for a perfect late night snack: the Doritos Locos Nacho Cheese Taco, a Taco Bell taco made with a hard-shell made from Doritos Nacho Cheese chips. Taco Bell heavily promoted the first Locos taco on social networks and even flew a food truck full of them to Bethel, Alaska where 33% of the town is between 18 and 24 years old.

The taco was released later in the spring of last year and the taco was a complete hit. Over the past year, the taco has accounted for a quarter of all taco sales with over 350 million units sold. In the first ten weeks, over 100 million units were soldâ€”a feat it took McDonaldâ€™s 18 years to accomplish after opening their doors. Thursday, they released another Locos Taco, this time Cool Ranch flavored. The success of this product, however, is written in the history of the two companies.

Frito-Lays VP of Marketing discovered the concept for Doritos at Disneylandâ€™s Casa de Fritos and he struck a deal in 1964 for Frito-Lay to begin manufacturing seasoning covered corn chips. After some success, the brand was redesigned on a $50 million budget, the costliest in Frito-Lay history, and was relaunched in 1995 as the wacky corn-based chip we know today. Itâ€™s not hard to say that Doritos are pretty far from what an authentic corn-based chip is and where the chips started in Disneyland.

Taco Bell has a pretty similar story. It was started by Glen Bell in 1962 and was bought by PepsiCo in 1978. Then, in 1997, Taco Bell became part of a PepsiCo subsidiary, Yum! Brands. Yum! refined the Taco Bell concept of reduced restaurant size with a limited menu of items primarily under $1 so the sales volume is high. Yum! used marketing and brand building for Taco Bell in wacky ways, offering free tacos to everyone if debris from the Mir hit a special target in 2001 or a base was stolen in the World Series in 2007, 2008, and 2012. No one can forget the “Â¡Yo quiero Taco Bell!” Chihuahua who sums up Taco Bellâ€™s image in the late 1990â€™s and early 2000â€™s. Just take a look at Taco Bellâ€™s past slogans to see how the brand has evolved: they started with â€œThe Fresh Food Placeâ€ and â€œThe Cure For The Common Mealâ€ but transitioned to â€œSpice Up The Nightâ€ and â€œThink Outside the Bunâ€ after the Yum! refinement. Todayâ€™s â€œLive MÃ¡s” isnâ€™t really that much of a far cry from YOLO (you only live once) which is sweeping social media today.

But the question remains, why has the Locos Taco been so successful? The two brands have complimentary brand images of cheap and wacky fun. Taco Bell also put a significant amount of time and effort into marketing directly to 18-25 year olds who grew up with Doritos as part of their lunchroom meals. People who are 25 now were 7 when Doritos relaunched as the current flavor-laden chip they know and loveâ€”itâ€™s a vestige of their childhood right when theyâ€™re on the cusp of adulthood. Theyâ€™re also prime age for social media platforms like twitter, Instagram, and Facebook and Taco Bell has run specific promotions through twitter for secret free taco â€œspeak-easys,â€ feeding a adult-like desire with a childish twist. Taco Bell knows exactly how to target their audienceâ€”give young and hip people free tacos and theyâ€™ll even promote your products for you, over and over again.

So what does this mean for franchises in the future? More brand crossover partnerships. There have been celebrity sponsorships before but they have yet to set record sales numbers as compared to the Doritos Locos Tacosâ€”the winning combination of using a product thatâ€™s a familiar favorite in a new twist that embodies both brands is the way of the future. Yesterday, Taco Bell came out with a new Doritos Locos Taco flavor, the Cool Ranch Taco. Sales numbers havenâ€™t yet been disclosed but you should expect more record setting.

Bill Bradley is a franchise expert who aims to help potential franchisees select the right franchise for them. He writes about franchising on his website, AmericasBestFranchsies.com, a resource of franchise information and opportunities dedicated to both franchisees and franchisors.