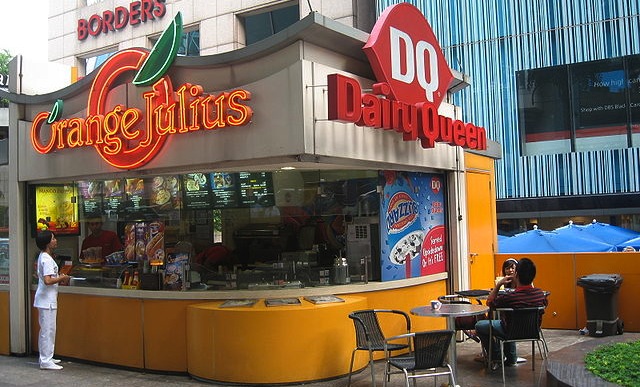 On this date in 1952, Julius Freed, the American inventor of the Orange Julius died.

The drink grew out of an orange juice stand opened in Los Angeles in 1926 by Julius Freed. Sales were initially modest, about $20 a day (about $245 in 2010 dollars, adjusting for inflation). In 1929, Bill Hamlin, Freed’s real estate broker, developed a mixture that made the acidic orange juice less bothersome to his stomach. Freed’s stand began serving the drink, which had a frothier, creamier texture. The sales at the stand increased substantially after the introduction of the new drink, going up to $100 a day. People began lining up at the store and shouting, “Give me an Orange, Julius!” Eventually, the new drink would simply be called “the Orange Julius”.

During the 1950s and 1960s, Orange Julius was sold at a variety of outlets, including state and county fairs and freestanding Orange Julius stands. The original stand also provided medicinal tonics and bible tracts.

If you’d like to make an Orange Julius at home, the book Top Secret Recipes: Sodas, Smoothies, Spirits, & Shakes purports to contain the recipe for that plus dozens of other “junk food” drinks.