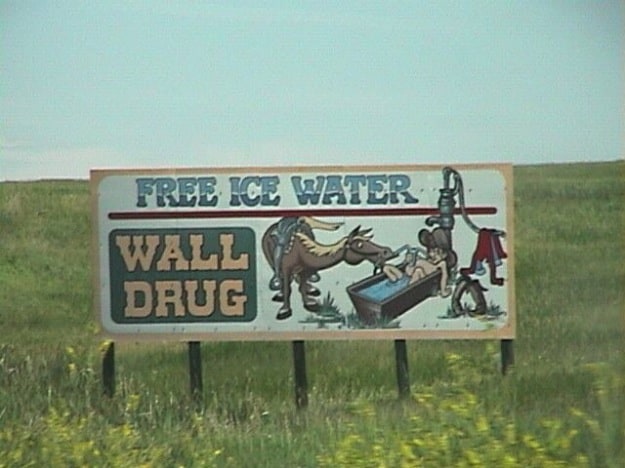 Wall Drug was the quintessential struggling small businesses in a dieing small town in 1936, when it stepped back and examined its intrinsic resources and realized that its key to success was free ice water:

One hot Sunday in July, though, a great change swept us up. It started quietly, in the deadening heat of an early afternoon, when Dorothy said to me, “You don’t need me here, Ted. I’m going to put Billy and the baby down for a nap and maybe take one myself.”

I minded the empty store. I swatted flies with a rolled-up newspaper. I stood in the door, and no matter where I looked, there was no shade, because the sun was so high and fierce.

An hour later Dorothy came back.

“No, it wasn’t the heat that kept me awake,” Dorothy said. “It was all the cars going by on Route 16A. The jalopies just about shook the house to pieces.”

“No, because you know what, Ted? I think I finally saw how we can get all those travelers to come to our store.”

“Well, now what is it that those travelers really want after driving across that hot prairie? They’re thirsty. They want water. Ice cold water! Now we’ve got plenty of ice and water. Why don’t we put up signs on the highway telling people to come here for free ice water? Listen, I even made up a few lines for the sign:

It wasn’t Wordsworth, but I was willing to give it a try. During the next few days a high school boy and I put together some signs. We modeled them after the old Burma Shave highway signs. Each phrase of Dorothy’s little poem went on a 12 by 36 inch board. We’d space the boards out so the people could read them as they drove.

The next weekend the boy and I went out to the highway and put up our signs for free ice water. I must admit that I felt somewhat silly doing it, but by the time I got back to the store, people had already begun showing up for their ice water. Dorothy was running all around to keep up. I pitched in alongside her.

“Five glasses of ice water, please,” a father called out.

We ran through our supply of cracked ice. I began chiseling more off the block.

“Say, good sir,” one traveler said in a Scottish brogue, “we’re going all the way to Yellowstone Park. Would you mind filling this jug with your water?”

“Hey this free ice water is a great idea,” said a salesman, sidling up onto a stool. “How about selling me an ice cream cone?”

Step back, and find your free ice water!