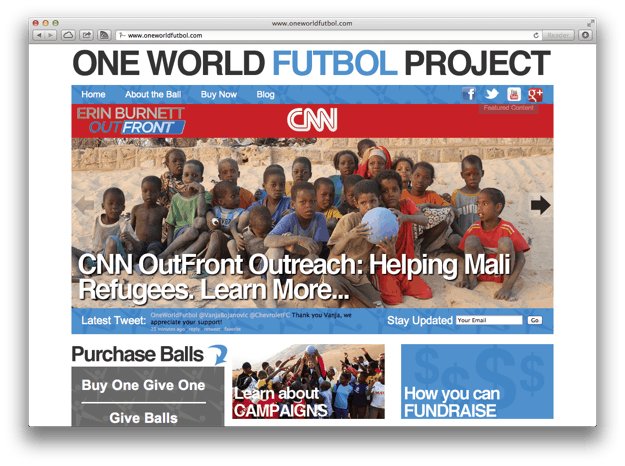 Tim Jahnigen has always followed his heart, whether as a carpenter, a chef, a lyricist or now as an entrepreneur. So in 2006, when he saw a documentary about children in Darfur who found solace playing soccer with balls made out of garbage and string, he was inspired to do something about it.

The children, he learned, used trash because the balls donated by relief agencies and sporting goods companies quickly ripped or deflated on the rocky dirt that doubled as soccer fields. Kicking a ball around provided such joy in otherwise stressful and trying conditions that the children would play with practically anything that approximated a ball.

â€œThe only thing that sustained these kids is play,â€ said Mr. Jahnigen of Berkeley, Calif. â€œYet the millions of balls that are donated go flat within 24 hours.â€

During the next two years, Mr. Jahnigen, who was also working to develop an infrared medical technology, searched for something that could be made into a ball but never wear out, go flat or need a pump. Many engineers he spoke to were dubious of his project. But Mr. Jahnigen eventually discovered PopFoam, a type of hard foam made of ethylene-vinyl acetate, a class of material similar to that used in Crocs, the popular and durable sandals.

Although this is a great idea for the kids in war torn places, I think that they are missing the largest market of all: dog owners.

If this ball is really indestructible, you could sell millions to dog owners.

Wait a minute. Whatâ€™s the point of selling an indestructible product? Youâ€™d only be able to sell one to each of your customers.