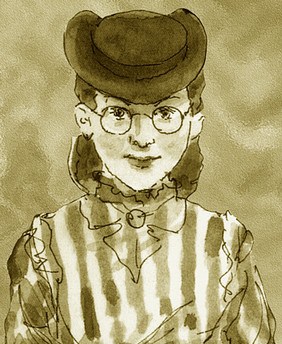 Born in Maine in 1838 and raised by a widowed mother, Margaret Knight showed a proclivity toward inventing from a very young age — a characteristic of many of the world’s famous inventors.

After observing an accident at a textile mill at the age of 12, Margaret went to work producing her first real invention. Knight conceived a device that would automatically stop a machine if something got caught in it. By the time she was a teenager the invention was being used in the mills.

After the Civil war, Margaret Knight went to work in a Massachusetts paper bag plant. While working in the plant, Knight thought how much easier it would be to pack items in paper bags if the bottoms were flat (they were not at the time). That idea inspired Margaret to create the machine that would transform her into a famous woman inventor.

Knight’s machine automatically folded and glued paper-bag bottoms — creating the flat-bottom paper bags that are still used to this very day in most grocery stores.

Charles Annan attempted to steal Knight’s idea and receive credit for the patent. Not one to give in without a fight, Margaret took Annan to court to vie for the patent that rightfully belonged to her.

While Annan argued simply that a woman could never design such an innovative machine, Knight displayed actual evidence that the invention indeed belonged to her. As a result, Margaret Knight received her patent in 1871.