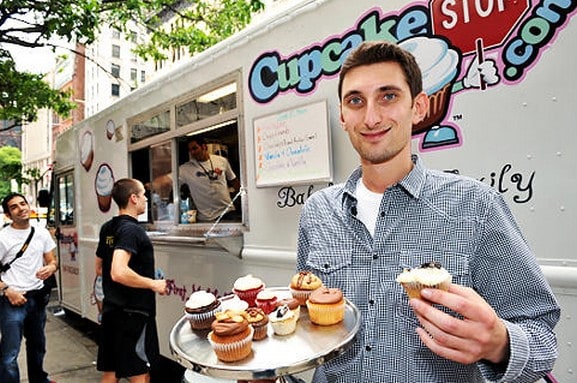 On a recent Tuesday morning, Lev Ekster paced around his future storefront in Manhattan’s newly opened Limelight Marketplace. He adjusted the 1960s kitchen-kitsch inspired dÃ©cor and awaited the delivery of a cupcake display case.

According to Inc.com, it would be the first non-mobile location of CupcakeStop, the gourmet cupcake truck he debuted on the New York streets last May.

Also this month, a storefront at his new bakery in Montclair, New Jersey, opened to customers. His website just launched, and a new delivery truck is operational.

That’s two storefronts, two full-time cupcake trucks, one delivery vehicle, one website taking mail orders, and one massive bakery, all staffed by about a dozen more employees than Ekster had 12 months ago. “Everything is coming down right now and it’s hard to fall asleep,” Ekster said.

If you needed proof that people love cupcakes, let this be it.

“I wanted the cake to be so good you could knock the frosting off and would love to eat it still,” he says. He found a local baker willing to experiment and used savings to buy a secondhand truck and rent a Brooklyn kitchen space at nights.

At the same time, in early 2009, consumers started substituting little indulgences — say, a $19 scarf, a $4 popsicle, or a $2.50 cupcake — for the big splurges, like travel, they had been scrimping on since the 2008 economic downturn.

Private research firm AnythingResearch.com listed bakeries and baked goods as its eighth fastest-growing industry hospitable to small business this year, saying “growth may be the result of people cutting back on larger entertainment expenses (e.g., vacations) and choosing instead to spend more on daily indulgences.”