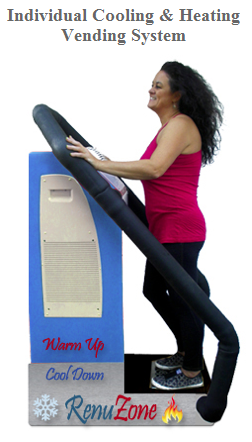 For the past several weeks, Michael Micucci and his business partners have been going to Zoo Atlanta, studying and gauging public reaction to and explaining concept behind the six, bright blue boxes around the zoo grounds.

Called RenuZone, the kiosk-like devices are cooling stations â€” for $1, a customer stands in front of several vents that shoot cold blasts of air for two minutes.

The devices are prototypes and Micucci, Renuzone’s inventor, is using the data collected from the zoo to refine the finished product, which he and his partners hope to bring to market early next year.

The idea was born from toting his grandchildren at a Six Flags theme park in New York, last year, he said.

It was a particularly hot day and it occurred to him there might be a market for folks wanting to cool down in the outdoors, particularly those engaged in any outside activity at places such as zoos, theme parks and concert or sporting venues.

The device can also be configured to release blasts of hot air, creating a wintertime market at ski resorts and outdoor sporting events.