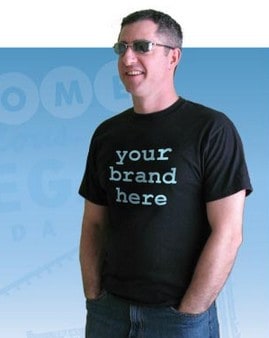 Dan Strong owns a business called StripWalker, which sounds dirty but isn’t. Starting January 1, for three hours a day, Strong will be walking along the Las Vegas Strip, wearing company’s T-shirts all day, and Twittering and texting about his experiences, all to promote his advertisers, reports WalletPop.

It seems like a solid marketing idea. According to EndemicMarketing.com, 17,700 people are out walking on the Strip at any given hour on any given day. During the peak hours, there may be as many as 40,000 people out and about. If Strong walks around in sponsored t-shirts every day, he’ll make an impressive $66,795 for the year.

“I can’t imagine I would have quit a full-time job — or that my wife would have let me — to pursue something as wacky as Stripwalker,” concedes Strong. “The plan has been to generate a buzz via Stripwalker, and if it sells out completely and stands on its own, great, but if not, I figured it would lead to additional work for my primary web and graphics business, and it has.”