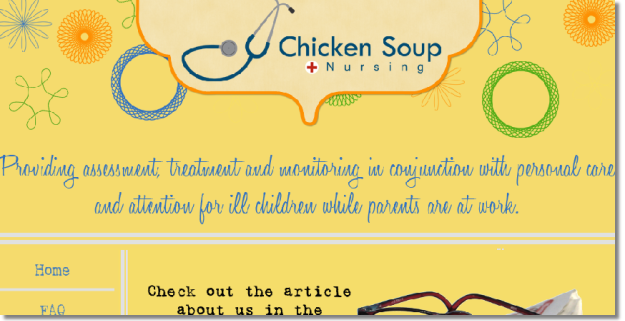 If your child is home sick, what do you do? For some it means calling in to work and staying home that day but it’s not always that simple.

Jean Kimerling was wondering the same thing one day. When her own children were young she had the option to stay home with them, yet she couldn’t help but wonder what parents did if they had to go in to work anyway. For them Jean is now providing a solution, Chicken Soup + Nursing, reports The News Tribune.

Dr. Kelly Cot sees the children in the morning and gives the nurses treatment plans for the day, Kimerling said. Nurse Practitioner Rebeka Pierson from Moms R Us and Kids 2 also has been seeing some patients.

[Sherry] Sams said she was the first person at Campbell & Co. to use Chicken Soup + Nursing. Her daughter was sick, and Sams, a single mom with three children, had a meeting she couldn’t miss.

Sams said she was surprised she didn’t need to take her child to a doctor before going to Chicken Soup + Nursing, and that the prescriptions were ready for her there when she picked up her daughter.

Her daughter played checkers with one nurse, and a card game with another, Sams said. “She was well taken care of,” she said.

Chicken Soup + Nursing is not a day care. Children rest in bed all day, Kimerling said. The beds are a minimum of 36 inches apart from other beds on all sides and children bring in their own toys.

Chicken Soup + Nursing charges a $10 registration fee per day for a child, Kimerling said. Then the company bills the family’s insurance company as it would for a doctor’s office visit and parents pay any co-payments and deductibles they normally would, Kimerling said.

All types of medical insurance are accepted, including state medical coupons, she said.

Children up to age 12 are accepted.