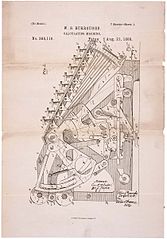 On this day in 1888, the first successful adding machine in the United States was patented by William Seward Burroughs.

Burroughs was the son of a mechanic and worked with machines throughout his childhood. While he was still a small boy, his parents moved to Auburn, New York, where he and his brothers were educated in the public school system. According to his father’s desire that his youngest son should choose a gentleman’s vocation, William, after his graduation from high school, entered the Cayuga County National Bank of Auburn as a clerk, where he spent long hours adding numbers.

At this time Burroughs became interested in solving the problem of creating an adding machine. In the bank there had been a number of earlier prototypes, but in inexperienced users’ hands, those that existed would sometimes give incorrect, and at times outrageous, answers. The clerk work was not in accordance with Burrough’s wishes, for he had a natural love and talent for mechanics and the boredom and monotony of clerical life weighed heavily upon him. Seven years in the bank damaged his health and he was forced to resign.

In the beginning of the 1880s Burroughs was advised by a doctor to move to an area with a warmer climate and he moved to St. Louis, Missouri where he obtained a job in a machine shop. These new surroundings, which appealed to him more, hastened the development of the idea he had already in his mind and the tools of his new craft gave him the opportunity to put into tangible form the first conception of the adding machine. Accuracy was the foundation of his work. No ordinary materials were good enough for his creation. His drawings were made on metal plates which could not expand or shrink by the smallest fraction of an inch. He worked with hardened tools, sharpened to fine points, and when he struck a center or drew a line, it was done under a microscope.

So, he invented a “calculating machine” designed to ease the monotony of clerical work.