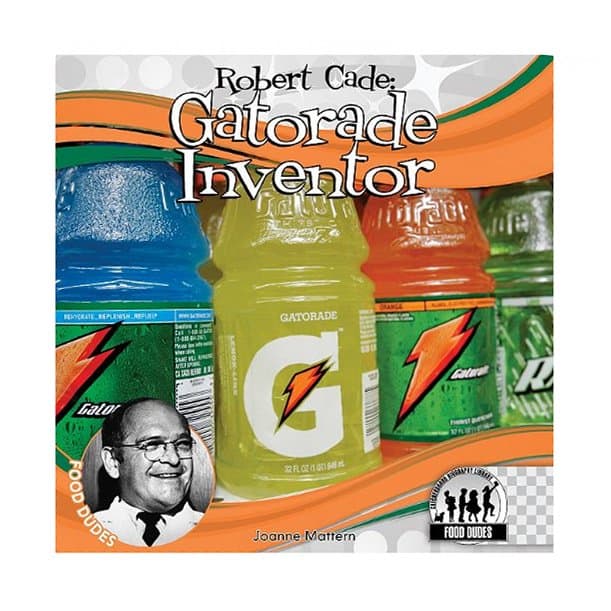 On this day in 1927, Robert Cade was born. James Robert Cade (September 26, 1927 â€“ November 27, 2007) was an American physician, university professor, research scientist and inventor. Although Cade engaged in many areas of medical research, he is widely remembered as the leader of the research team that formulated the sports drink Gatorade.

In 1965, Cade was approached by Dewayne Douglas, an assistant coach for the Florida Gators football team, about the extreme dehydration faced by Gator football players practicing in the high temperatures and humidity of the Deep South in late summer and early fall Douglas questioned Cade why his football players did not urinate during practice and games Cade learned from anecdotal evidence that football players were losing water through perspiration and failing to replace fluid during practice and games Cade’s research team discovered that football players were losing up to 18 pounds (82 kg) during the three hours of a college football game, and that ninety to ninety-five percent of that loss was water A player’s plasma volume could decrease as much as seven percent and blood volume by five percent, and sodium and chloride were excreted in the sweat

During 1965 and 1966, Cade, together with his team of research doctors Dana Shires, James Free, and Alejandro M de Quesada, conducted a series of trial-and-error experiments with his glucose-and-electrolytes rehydration drink on members of the Gators football team of coach Ray Graves, first with members of the freshman squad, and after initially promising results, with starting members of the varsity team “It didn’t taste like Gatorade,” Cade said in a 1988 interview with Florida Trend magazine In fact, according to Cade, when Gators lineman Larry Gagner first tried it, he spat it out and strongly suggested that the original experimental formula tasted more like bodily waste Dana Shires remembered that “it sort of tasted like toilet bowl cleaner” To make it more palatable, at the suggestion of Cade’s wife, the researchers added lemon juice and cyclamate to the original formula of water, salt, sodium citrate, fructose and monopotassium phosphate

Cade appeared in “The Legend of Gatorade” television commercials narrated by long-time college football announcer Keith Jackson in 2005, during which Cade declared, “Naturally, we called our stuff Gatorade” However, the rehydration drink was first known as “Cade’s Ade” and “Cade’s Cola” to the Florida Gators football team, and only later became known as “Gatorade” The drink received its first real test in the Gators’ 1965 game against the LSU Tigers football team; the Tigers faded in the 102 Â°F (39 Â°C) heat of the second half and the Gators did not Coach Graves was convinced, and asked Cade to produce enough of his potion for all Gator games Gatorade achieved national prominence as a result of the Gators’ first Orange Bowl title over the Georgia Tech Yellow Jackets in January 1967 The Gators reinforced their reputation as a “second-half team” and came from behind to defeat the Yellow Jackets 27â€“10 Afterward, Georgia Tech head coach Bobby Dodd told reporters: “We didn’t have Gatorade; that made the difference”

Cade patented the formula and offered all of the rights to the drink to the University of Florida in exchange for the university’s backing of the production and marketing of the drink, but the university turned down his proposal He initially obtained bank financing and began to produce “Gatorade” through his own business, but later entered into a contract with Stokely-Van Camp, Inc to produce and sell the drink When sales royalties reached $200,000, the university took notice The Florida Board of Regents, prompted by the US Department of Health, Education and Welfare, which had provided Cade with a small grant for his research, asked for the patent rights Cade refused The Board of Regents, acting on behalf of the university, then brought suit against Cade for a share of the profits, arguing that the university’s facilities, employees and students were instrumental in the development of the product After thirty-one months of legal wrangling, Cade and the university negotiated a settlement of their dispute in 1972, and the Board of Regents and the university settled for a twenty percent share of the royalties Cade, and his investors in the Gatorade Trust, retained eighty percent In the aftermath of the settlement, all parties decided to play niceâ€”of the first $70,500 in Gatorade royalties received by the university, the university reinvested $30,000 in kidney research by Cade’s renal department and another $12,000 in Cade’s other research projects Cade, for his part, created multiple scholarships and contributed generously to the university from his own royalties over the following years