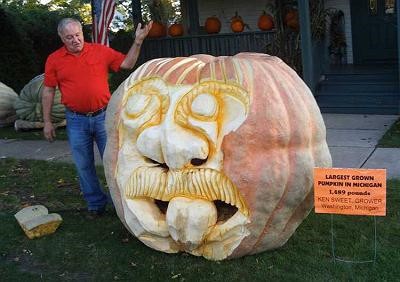 Ed Moody carved his first pumpkin at age 6. He is now one of the premier pumpkin carvers in America reports The Chicago Sun Times.

Moody has carved 23 giant pumpkins – weighing more than 200 pounds – that sit in his front yard.

It is a Halloween Stonehenge.

Around this time of year, Moody’s house is one of the biggest tourist attractions in Michigan. More than 50,000 pumpkin fans – 5,000 on Halloween weekend – will visit the Moody homestead.

During my visit, Moody was carving a 1,489-pound pumpkin. He installed a small back door so kids could climb in.

The Michigan state record is 1,478 pounds. The world record is 1,658 pounds, announced earlier this week at the 36th annual World Championship Pumpkin Weigh-Off in California.