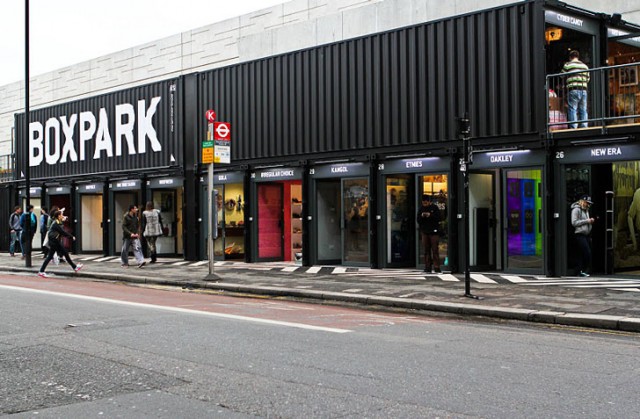 Every industry is finding ways to work around the economic downturn at the moment, and for some the limitations of budget have produced some of the most creative modern work out there. Architecture is just one of these sectors, with financially-savvy business hiring innovative designers who aren’t afraid to reuse materials and create something truly unique.

Shipping container recycling is most popularly applied to temporary office space or classroom solutions. However, many advances have been made to bring this modular building material into larger projects – take a look at some of our favourites below.

BOXPARK was opened in 2011 as the world’s “first ever pop-up mall”. The entire structure is made from stripped and refurbished shipping crates, each of which housing one of the many retailers, restaurants and amenities around the shopping centre. It’s made up of 60 container units, with around 40 being used for fashion stores and a further 20 on top of those to create a second storey of cafÃ©s, bars and food outlets. Despite the deep thought process that obviously went into the design – brand consultant Roger Wade said at the time: “We want to take container architecture to the nth degree. We want to control everything with an industrial nature and give it a lovely handwriting.” – the whole space only took three weeks to construct.

BOXPARK is unlike any normal high street alternative; the brands here are focused on creativity, high fashion and design, while events like the Street Feast project which took place recently prove that, despite its humble parts, BOXPARK is a place of real community spirit, filled with luxury and ingenuity.

Mooney House hit the headlines in October thanks to growing interest in the build from locals trying to catch a glimpse. The home is one of several being built by architect Mat Mooney, and is constructed from wooden framing below and 14 shipping containers which make up the second storey. According to Mooney, the aim is to have windows on the front and back of each, so that the rear of the home is visible from the front. The 3,700-foot home will primarily be located in the upstairs crates, which will be refurbished and have doors carved in each to create an open and comfortable living space.

Local reaction has been varied; while some have expressed concerns about the final product, 30-40 people stop per day to take photographs, and 200 came out to watch the crates being lifted onto the structure last month. Mooney waxed lyrical about his fondness for containers, saying: â€œPeople call these things shipping containers, but technically they are prefabricated steel modules. These are beautiful pieces of equipment,” adding, “The more Iâ€™ve looked at them over the years, the more I realised what an elegant piece of engineering these are. They are like a solution waiting for a problem.â€

However, neighbours need not worry that the crates will remain a major part of the design; Mooney also said of his plans: “People automatically think this house is all about the containers, but actually itâ€™s all about the views.”

Yes, you may be surprised to learn that the very same studio we saw Gaby Logan and Gary Lineker settled in for the duration of the Olympic Games was in fact a large grey shipping container, perched on top of 18 smaller crates containing the BBC team responsible for reporting throughout the event. These were fully refurbished as functional, modern offices, and made the ideal contribution to the Olympic Committee’s bid to stay as environmentally friendly as possible throughout the games.

The Â£1 million studio was more than just a matter of value for the BBC, however; shipping containers are built to withstand the windy conditions to be expected in transatlantic journey, meaning that architects could be certain the British weather wouldn’t affect reporting, while the modular “building block” nature of the crates made it easy to elevate the presenters to a height with a good view of the grounds.

The BBC recently gained the rights to broadcast from the 2016 games in Rio and the 2020 games in Tokyo, so the ownership and experience of prepared shipping containers may well serve them for a few years to come!

This piece was brought to you with some help from shipping container providers Mobile Mini. Can you think of any creative uses for a shipping crate? Let us know in the comments below!