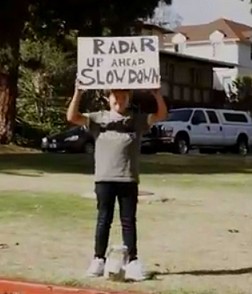 I was watching the TV show Southland last night.

The street cops come across this kid standing by the side of the street holding up a big sign that reads ” Radar Up Ahead, Slow Down”.

The kid tells the cops it’s not illegal cause his father’s a lawyer.

The cops ask why he is doing it and the kid shakes a big glass jar full of bills and coins and says, “the money, man.”

The other cop says there’s not even any radar up there. The kid replies, “they don’t know that.”

The cops laugh and give the kid a dollar.

This got me to thinking. If you live in an area with a lot of road construction, you probably know the shortcuts around the traffic backups.

Make a sign that reads something like “Shortcut to I-75!” People stop and ask for directions and give you a buck or two.