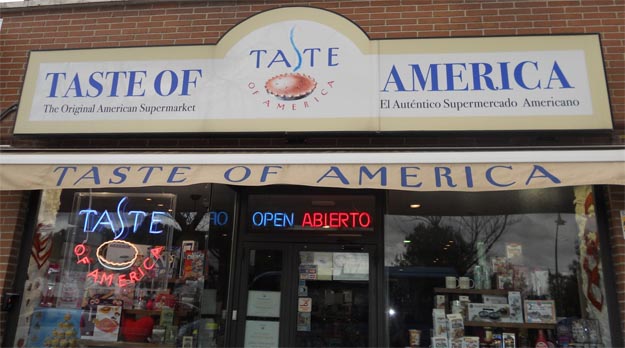 Taste of America is a franchise retail chain in Spain that sells American food. From graham crackers and cranberry sauce to Betty Crocker cake mixes and Kraft macaroni and cheese the store stocks everything that a that expatriates and “American” food lovers might desire.

Founded in 1994, the chain has grown from one store to nine franchised locations across Spain by the end of the year. In four years, the company expects to have sold another forty franchises.

Because of customs duties and shipping, products in Taste of America stores are more expensive than in most U.S. supermarkets. Pepperidge Farm Sausalito cookies cost â‚¬2.99 ($4.10), vs. $2.99 in the U.S. For bulkier items such as breakfast cereal, the markup can be much higher. A 16 oz. box of Cheerios is â‚¬7.95 at Taste of America, vs. $4 to $5 in the U.S. Despite the premium, â€œweâ€™re still very competitive,â€ Knowles says, comparing her prices to those for Spanish specialities in New York.

Video report after the jump.