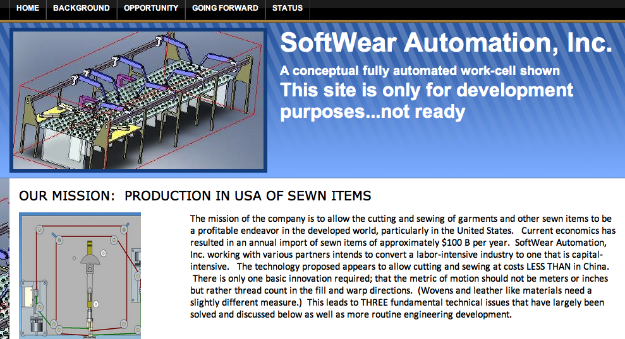 Usually the Pentagon’s far-out researchers are more concerned with four-legged robots and preventing pandemics than with the contents of a soldier’s closet. But they’ve doled out $1.25 million to fully automate the sewing process. The agency aspires to “complete production facilities that produce garments with zero direct labor.” And those are a lot of garments: One 2010 estimate put the military’s annual clothing budget at $4 billion dollars.

The company on the receiving end of Darpa’s award, SoftWear Automation Inc., has so far developed “a conceptual” version of just the automated system that the agency’s after. The basic principle behind the company’s innovation, according to its website, is a robotic system that relies on an extremely precise monitoring of a given fabric’s “thread count” to move it through a sewing machine in the proper direction and at the right pace. Dr. Steve Dickerson, the company CEO and a robotics and engineering researcher, didn’t respond to request for comment.