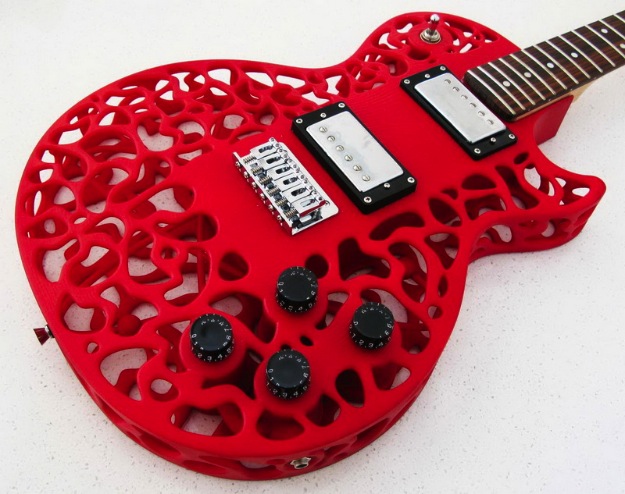 Whatâ€™s rock and roll without someone smashing their guitar at the end of the performance? If an inventor in New Zealand has his way, future guitars will be indestructible. These type of guitars could potentially be commonplace around the world. Oh yes, and theyâ€™ll be 3D printed to your exact specifications. The Guardian has more:

â€œYou could throw one against the wall without worrying about it breaking,â€ said Diegel, who will begin selling the guitars online at the end of June. Their robustness might be music to a band managerâ€™s ears. But perhaps more notable is how Diegel makes the instruments, which are attracting interest from around the world. Diegel is an exponent of 3D printing. His zany guitar bodies are created using computer-aided design (CAD) software, output in one piece on an EOS 3D printer. This is the new world of additive manufacturing. â€œThe old style of [subtractive] manufacturing is you start with a block and cut away the material you donâ€™t need. With this you start with nothing and add material one layer at a time until the object is finished.â€ The process is a little like inkjet printing, but instead of ink squirting out of the print head, successive layers of plastic or metal powder are deposited according to the CAD fileâ€™s instructions. Layers are fused together by the heat of the molten plastic or with a precision laser beam in a process called sintering. Pundits say the technology ushers in a manufacturing revolution. Whereas designers have for a couple of decades been using 3D printers costing several thousand pounds to create manufacturing prototypes, devices for less than Â£1000 are now appearing on enthusiastsâ€™ desktops. They can be used for making anything from plastic toys to circuit boards.