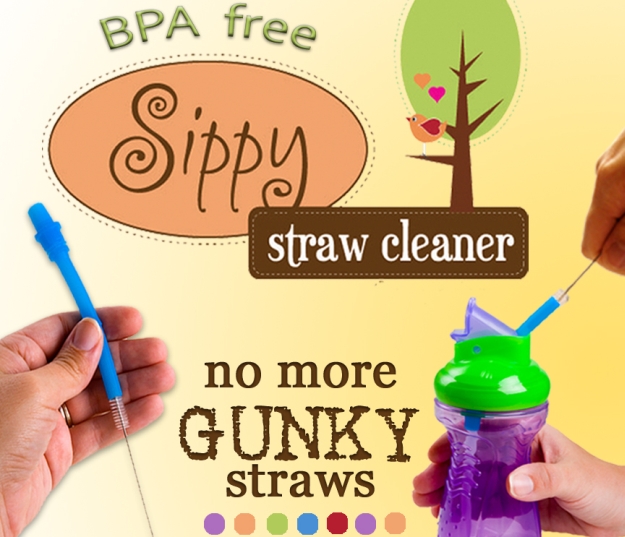 As any parent knows, a sippy cup that was lost and suddenly materializes a few days later isn’t a pretty sight. Depending on what was in the cup it is almost guaranteed that the liquid has congealed or simply clogged up the built in straw, rendering the cup useless. Of course that would mean you’d have to make another run to the store and buy yet more sippy cups, a task that is just as costly as it is frustrating.

Jennifer Reyes was frustrated too. She was tired of trying to clean out clogged and unsanitary sippy straws. No matter what she tried to use, it just didn’t seem to work. At that moment a lightbulb went off in her head. Putting her frustrations to work, Jennifer created the Sippy Straw Cleaner.

Tell us a little about the Sippy Straw Cleaner and what inspired it.

Have you ever accidently left your child’s sippy cup in the blistering hot car or wonder what that odd smell is coming from under the couch, only to find your child has hidden their thermos there over a week ago? Have you ever gone to pick up your children from daycare only to see some other runny nosed child drinking out of your child’s sippy cup? I am a stay at home mom that has tackled the never ending battle of trying to disinfect and clean out the curdled milk or molded apple juice from my children’s sippy cup and thermos straws. I tried using toothpicks, pipe cleaners, Qtips, even small paintbrushes… always with minimal success. I never felt confident that it was bacteria free and clean enough to have my children drink through it again. After throwing away TONS of expensive sippy cups because of dirty, clogged straws, I came up with the idea for a mini reusable straw brush cleaner…and voila … the idea for the Sippy Straw Cleaner was born.

Besides sippy cup straws, what are some other uses for it?

We’ve had lots of fun feedback regarding what people use the Sippy Straw Cleaner for. Let me list a few:

How long did it take for you to create a prototype brush that you felt comfortable with?

I came up with the idea in August 09 and went straight to work. I first ordered similar brushes used to clean lab test tubes and built from there. I made many changes to the nylon bristle lengths, the strength of the wire, and adding a user friendly handle to allow for easier scrubbing motion. All in all, I think I had a working prototype towards the end of September.

When did the Sippy Straw Cleaner officially launch?

We hit the market on November 1st 2009, had two wholesale accounts by Nov 3rd and distributing internationally by Nov 9th. In fact, I was approached by two different licensing companies in the beginning of December.

What was the idea to launch process like for you?

A bit overwhelming!! Being a stay at home mom of two kids, going to school full time for a second degree, launching Sippy Straw Cleaner, developing an iphone application, and training for a half marathon seemed a bit much on my plate. There were many sleepless nights talking to China on the computer till the wee hours of the morning, and my kiddos had more chicken nuggets in those 4 months than they had had in their whole lifetime. I found that if I made lists and was able to complete one task before taking on others it helped me to focus more. I was never caught without having a spiral notebook in my hand.

What steps did you take to market your product? How did you determine the best route for you?

First and foremost, I believe that you must have a working website this day in age. Surprisingly, you don’t have to pay big dollars for one though as expected. I think my website cost me $60 total. I owe just about every individual sale and almost all wholesale accounts to the amazing networking done through social media..ie Twitter, Facebook, and Mommy Bloggers. Being a mom and trying to launch a “mom” product, who better to chat with then other moms via the internet? I would suggest diving into social media with everything you’ve got.

What are some goals that you’d like to accomplish before your first anniversary?

Are there any lessons that your business has taught you?

Yes, absolutely nothing goes exactly how you planned it. There will be bumps in the road that you didn’t foresee and you just deal with them as they come. Be open-minded and always ask for lots of feedback. Also, stay organized and document everything. If you haven’t started an inventor’s composition notebook, do so immediately and record every interaction that you make with people, products, and services.

Is there any advice you’d like to share with fellow mom inventors that are just getting started?

I think it is imperative that you do tons of research on the internet before ever spending a penny. With the internet, Google specifically, you’re able to research similar products on the market, patents, market analysis, and statistics pertaining to your invention. Also, I would get my hands on the Mom Inventors Handbook by Tamara Monosoff. This is an incredible resource that will take you through the entire invention process. I still use it almost daily.