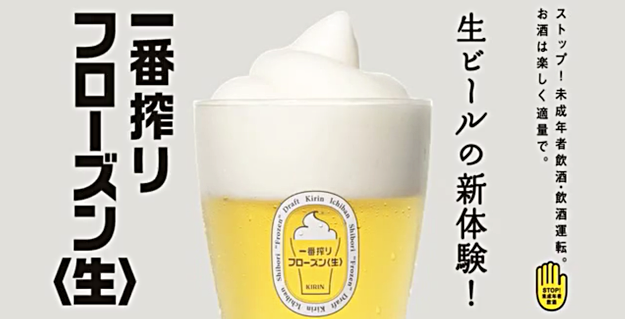 According to the Beer Street Journal, a Japanese brewer will be adding a frozen draft beer to its lineup soon:

The beer itself isnâ€™t frozen, the head of it is. Kirin has developed a special tap that will chill/freeze the head of the beer at 23 degrees Fahrenheit. The frozen part acts a lid to keep the beer cold for up to 30 minutes, and can be eaten as a sorbet. Ichiban Shibori frozen beer will be available in close to 1,000 restaurants in Asia by the end of the year.

The foam machine seen in the video below produces the head by a method called â€œFrozen Agitation.â€ Air is blown into the beer to fluff up the head, and then flash chilled. Itâ€™s dispensed much like soft serve ice cream.