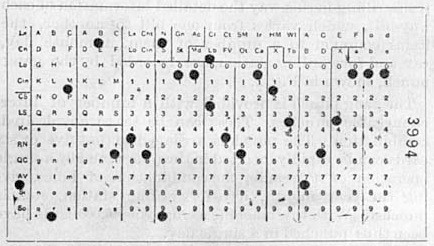 Herman Hollerith (February 29, 1860 â€“ November 17, 1929) was an American statistician who developed a mechanical tabulator based on punched cards to rapidly tabulate statistics from millions of pieces of data. He was the founder of one of the companies that later merged and became IBM.

Hollerith built machines under contract for the Census Office, which used them to tabulate the 1890 census in only one year. The 1880 census had taken eight years. Hollerith then started his own business in 1896, founding the Tabulating Machine Company. Most of the major census bureaus around the world leased his equipment and purchased his cards, as did major insurance companies. To make his system work, he invented the first automatic card-feed mechanism and the first key punch (that is, a punch operated by a keyboard); a skilled operator could punch 200â€“300 cards per hour. He also invented a tabulator. The 1890 Tabulator was hardwired to operate only on 1890 Census cards. A plugboard control panel in his 1906 Type I Tabulator allowed it to do different jobs without being rebuilt (the first step towards programming). These inventions were among the foundations of the modern information processing industry.

In 1911 four corporations, including Hollerith’s firm, merged to form the Computing Tabulating Recording Company (CTR). Under the presidency of Thomas J. Watson, it was renamed International Business Machines Corporation (IBM) in 1924.