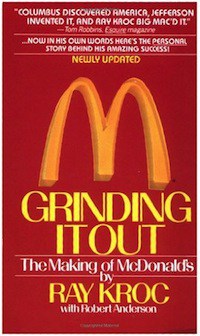 On this day in 1984 Ray Kroc died. Though he didn’t start the company, Kroc is best known as the man who built McDonald’s into the most successful fast food company in the world.

Ray Kroc was originally a milkshake machine salesman but then he noticed the McDonald brothers, because they had purchased eight of his mixers.

Immediately after visiting the San Bernardino store, Ray became convinced that he could sell mixers to every new franchise restaurant that they opened, and so he offered his services to the McDonald brothers who were looking for a new franchising agent following the departure of agent Bill Tansey due to health issues. Kroc eventually became frustrated with the brothers’ desire to maintain only a small number of restaurants. In 1961, he bought the company for $2.7 million (enough to pay each brother $1 million each after taxes).