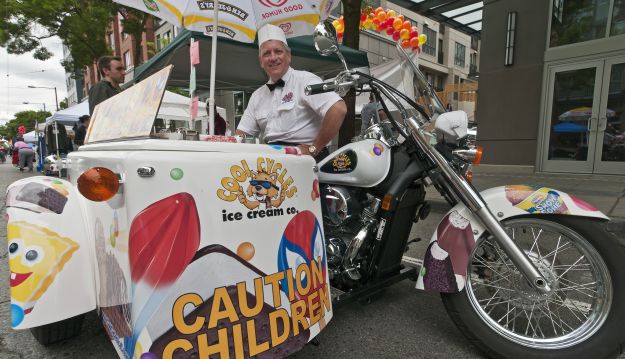 If you’ve ever lived in a neighborhood that had an ice cream truck come through, then you already have a basic idea of what they look like. Basically they are big, bulky vans with a window in the side for handing out the treats you purchase. However one company is out to change your impression of what that truck should look like.

The Cool Cycles Ice Cream Co. is a new breed of ice cream truck that isn’t even a truck. Instead Cool Cycles uses a specially made sidecar and motorcycle combination to sell prepackaged ice cream to the public.

I recently spoke with Joel Semanko, the president and CEO, about the business and their franchise opportunity.

Tell us a little about Cool Cycles Ice Cream Co.â„¢

The Cool Cyclesâ„¢ Founder John Gibson was an investor in a foreign sidecar company back in the early 90’s. One of the first sidecars delivered into the country wasn’t a passenger sidecar; it was a small pickup box. What was a mistake turned out to be the inspiration for the Cool Cycles Ice Cream Coâ„¢. The founder thought if they are using sidecars to haul construction materials, what could he do with this sidecar? He thought if he put an ice chest and music box on it, he could sell ice cream in the neighborhoods. That was in 1993, it took almost another two years to design and build the original Cool Cyclesâ„¢ sidecar motorcycle.

When was it launched?

After two years of trial and error, design and re-design, six Cool Cyclesâ„¢ were built in 1996. The founder hired employees to sell novelty ice cream out in the neighborhoods and local events around Tacoma WA. He ran the company for two years and then closed it to pursue developing some apartments in the local Tacoma area. It wasn’t until 2005 that circumstances led him to start exploring the idea of finding a business partner to help develop Cool Cyclesâ„¢ into a franchise opportunity.

When did you start franchising?

In 2005, the Cool Cyclesâ„¢ President, CEO Joel Semanko met John Gibson in a chance meeting at an Apartment Industry event. A friend suggested John show Joel his ice cream business and as a result of that meeting; a partnership was formed, four corporations were established, trademarks were filed and the process of franchising Cool Cyclesâ„¢ started. Four years later in 2009, Cool Cyclesâ„¢ first franchise was sold to a local banker in the Tacoma WA area that had seen the Cool Cyclesâ„¢ back in 1997 one day while walking down the street and thought to himself that’s a great business idea. He read an article about Cool Cyclesâ„¢ offering franchises in the News Tribuneâ„¢ and called immediately to become the first Franchisee in the country.

Tell us a little about the Cool Cyclesâ„¢ franchise opportunity.

Cool Cyclesâ„¢ has always been designed to be a part time or full time business with low start up costs. Depending on which region of the country you start the business, the full start up costs for a single Cool Cyclesâ„¢ sidecar motorcycle unit and freezer, franchise fee and three months operating expense will average less than $45,000 plus tax and licensing. There are optional equipment packages that may increase the initial startup fees. A complete list of costs and fees is available in the FDD and can be requested on our website, www.coolcyclesicecream.com Cool Cyclesâ„¢ is unique because it doesn’t require you to sign a lease on a retail location and personally guarantee it for the term. In most cases, you can operate the Cool Cyclesâ„¢ business out of your home or a local commissary. Because the Cool Cyclesâ„¢ franchise sells prepackaged ice cream, franchisees can get their ice cream from one of the Cool Cyclesâ„¢ Depots or commissaries or an approved distributor. The monthly royalty fee and marketing fee is fixed, not a percentage of the monthly revenue. Cool Cyclesâ„¢ has a great uniform and trade dress that sets us apart from the traditional ice cream van or vehicle. It is worn specifically to identity us as a welcomed image in the community. Combine that with the great graphics and custom sound on the Cool Cyclesâ„¢ sidecar motorcycle unit itself and you have an image and nostalgic memory that is welcomed throughout the communities we operate.

What are your requirements?

Initial Franchise Fee $7,995.00, 10 year Agreement. The minimum equipment start up package is $26,500.00 plus tax and licensing. It includes the Cool Cyclesâ„¢ unit (motorcycle with sidecar), which is available through our Cool Cycles Affiliate and a commercial grade chest freezer. The Cool Cyclesâ„¢ Company fabricates the sidecar motorcycle; it is not available as a separate sidecar that will attach to your personal motorcycle. There is a trademark and trade dress requirement outlined in the Agreement, available upon request of our FDD at www.coolcyclesicecream.com
Where do you currently have opportunities available?

Cool Cyclesâ„¢ currently offers franchises on the west coast in Seattle/Tacoma WA, Portland OR and San Diego CA. As our San Diego market launch develops, we’ll expand into the Los Angeles area and other Southern California areas.
What are some goals you hope to accomplish over the next year or so?

Cool Cyclesâ„¢ ultimately will expand across the nation. As we develop our metro markets, we’d like to expand into the multiple franchise arena allowing existing franchisees to purchase area expansion franchises and help expand the Cool Cyclesâ„¢ franchises across the nation. We have registered 6 trademarks with 7 international classifications. Long term we plan to expand internationally.

What are some lessons you’ve learned from your business?

I’ve learned many lessons and still believe there are many more to come. We’ve learned from a planning perspective to take things one step at a time which allows us to change plans and in some cases minimizes the consequences of mistakes we’ve made along the way. We’ve learned pick your advisors carefully. And finally, nobody tells our story better than we do.
Have you always been entrepreneurial minded?

Yes, when I was 10 years old, my father gave me the book The Greatest Salesman in the World by Og Mandino and I read it. I remember it inspired me to go do my own thing, so as a child, I sold a general purpose cleaning agent door to door, shoveled snow out of driveways, mowed lawns and even developed a program to give customers a discount if I used their mowers and fuel. I was always the highest sales in the Greatest American Chocolates fund raisers at my school. I developed the habit of reading business biographies if you meet me in my library, you’ll see that I’ve read about quite a few businesses over the last thirty years. I have 3 specific books that I can point to that have continually inspired me to move ahead and start my own business. I have about four defining moments along the way where someone has said something to me that changed the course of my journey in order to be prepared for opportunity when it showed up. I remember telling people I’d own my own business one day and they’d ask me what kind. My response was always, “I’m not sure, but I’ll know it when I see it”. That happened for me when I was 42 years old back in 2005 when I met my business partner John Gibson. Long story short, when he showed me the picture from his wallet of the Cool Cyclesâ„¢ unit, I knew immediately that I’d found it finally after almost 30 years of staying alert and looking. 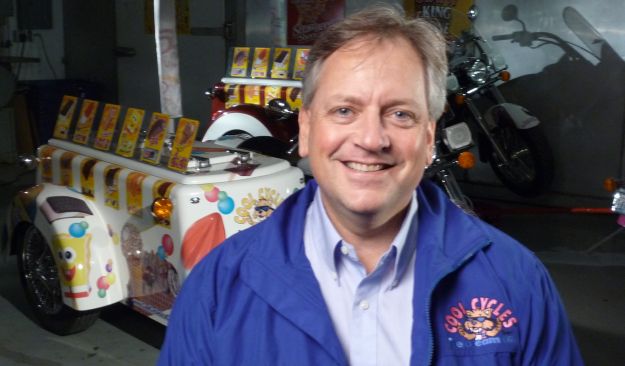