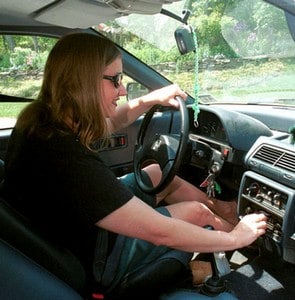 Driving while texting is a growing menace. As the incidents of texting-related fender benders and worse mount, 19 states have outlawed the practice.

But road texting is a tough habit to break.

Seeing a big opportunity, a bevy of start-ups is rolling out services that disable and divert text and e-mail while recipients are on the go, reports Inc.com.

Software entrepreneur Matthew Howard started ZoomSafer after a texting-related mishap caused him to knock a 9-year-old boy off his bike. The child was unhurt, but a mortified Howard developed GPS software that turns off a phone’s keypad at speeds above 10 mph. (A passenger mode overrides the system.) Incoming texts are stored, and the sender is notified that the driver is unavailable. A new service will also convert incoming text to voice via speakerphone. The software is downloaded as an app, costs $25 a year or $2.99 a month, and runs on BlackBerrys.

Safe Driving Systems’s Key2SafeDriving is a device that plugs into the diagnostic port beneath the steering wheel and connects wirelessly to your phone. It activates as soon as the engine starts. Incoming texts and calls are held, and outgoing messages are blocked, except to 911 and emergency contacts. An attempt to override the system prompts a text alert, sent to a teen driver’s parent, for instance, or a worker’s manager. The device costs $100 and is compatible with Windows phones and, soon, with BlackBerry and Symbian phones.

reQall sells a general-use voice-activated system that has become popular among drivers who want to cut down on texting. Drivers dictate commands like “Tell Bill I am running late.” Then the message is sent as text to Bill’s e-mail account or a cell phone. The system does not, however, convert incoming texts to voice. The reQall application is a free download; a version that sends alerts and reminders to drivers as they approach specific locations costs $2.99 a month or $24.99 a year and works with BlackBerrys and iPhones.