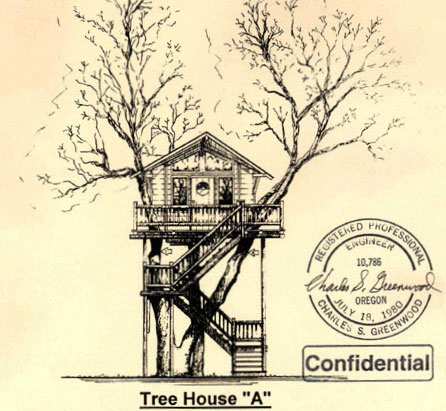 In this 17-minute documentary, Michael Garnier, proprietor of the Out’n’About Treehouse Resort in Oregon talks about his tree house business. His bed and breakfast contains the largest concentration of tree houses in the world.

He didn’t always build tree houses. In fact, as an Oregon-hippy, he started out trying to make money with his organic, psychedelic kaleidoscope invention called the “picture propeller” He actually made a living off of those for over a year.

But he needed more money, so he tried building fencing, pole barns and wooden furniture, but none really caught on.

So he tried tree houses.

At first, people thought he was crazy, and that it was a gimmick. Even the county wouldn’t give him a permit. After he built his first tree house the county ordered him to take it down. So he stress tested it with 66 people, two dogs and a hummingbird. The publicity from this conflict eventually brought him customers.