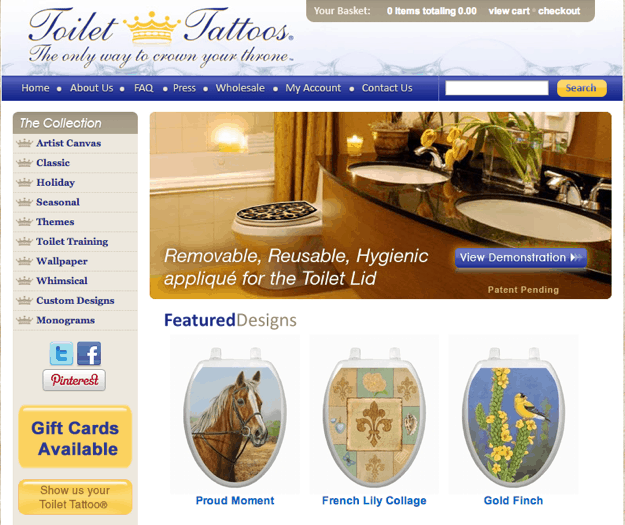 â€œIt was just this Ah-ha moment,â€ she explained. â€œI thought, I have two choices — the rug-like shell my grandmother used to cover her toilet with or a decorative seat with sea shells in it, and neither one was going to work for me. There was a need out there that was not being met and I knew I could meet it.â€

Celeste wanted to create something that could be changed often — on a decorating whim or to fit in with holiday dÃ©cor — but without a sticky adhesive that could do damage to the toilet. And she also wanted it to wipe clean, since it was going to be in the bathroom, where accidents happen and germs abound.

â€œFriends would look at me with a blank stare when I told them what I wanted to do, but I thought, why wouldnâ€™t you want your toilet to fit in with the rest of your dÃ©cor? People might be embarrassed to talk about toilets — but the reality is, most people have at least one.â€

â€œThere were definitely people who were skeptical, but my siblings like to call me the President of the Answer Your Own Question Club. I may ask you what you think, but if I like the idea Iâ€™m going to do it no matter what you say.”

And do it she did. Celeste began with five designs, printed on a material that had a magnetic-like property, which would allow the decorative covers to cling to the toilet seat. She named the company Toilet Tattoos — something that her mother found a bit embarrassing — and as the family expected, she followed her gut.